Inseparable since the beginning.

Following the last post about Information, Knowledge, Wisdom and Innovation let’s add one particularly interesting and dynamic object organiser, an object by itself: The Workflow. The representation of a particular sequence where value is created and wealth built.

Work flows, mostly in groups, sometimes on your own, but always as a sequence of activities is where all value is created. If the value creation efficiency increases, then wealth is created.

For each historical and economical “age” the efficiency of value creation, and hence wealth creation, took two major leaps in two distinct steps; the first addressing the work, the second step mostly much later, when the work flow was addressed.

First we changed the “What” we do: From gathering in the wild to planting seeds to be harvested. From using muscles to letting an engine do the hard work so we could create and refine for more value.

Then we changed the “How” we do things: Irrigate instead of waiting for the rain, plough dung and more back into the earth so the plants were well fed. Put cars together on a assembly line so time is spent on value creating work not on organising work.

The new “What”s and “How”s gave an enormous boost to the overall wealth and living conditions, but the changed “How” probably delivered a bigger boost than the first change of “What”:

In the agricultural age it was irrigation, fertilisers and knowledge of what crops where and when that made things really take off.

In the industrial age Mr Ford gave us the proof when he automated and supported the flow without making any changes to the value-creation-work as such – going from 728 man-minutes per car to 93 man-minutes per car in one year. It was not even expected, but Henry was probably mildly amused by the results while it filled his coffers faster than anything seen before.

So now we’re supposed to be in the “information age”. And yes, step one has been done, “What” we do have changed and we do not spend time in typing pools any more.

But we still have not done anything about step two. The work flow is the same, the age old methods still rule and takes up about 65% of people process time. Organisational hierarchies, organising, budgets and meetings still hold the actual value creation activities together, methods more or less unchanged since Julius Caesar was at it. 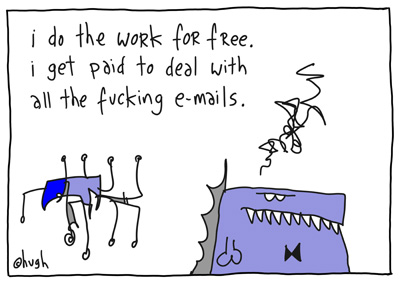 When we get to step two we shall be able to declare that the “information age” has really been accomplished, but not quite yet. And I would suspect that the first one doing it will reap results not seen since Ford back in 1914.