The IT services market has arrived at its most critical infection point in 20 years, where the role of service providers that survive the Covid era will be those that have made the shift from support firm (Phase 1) to a business partner (Phase 2).  We’ve talked about this services shift ever since Tom Reuner and I were young analysts.  And we’re not very young anymore.  Especially Dr. Reuner.

So why on earth is Atos bidding to make some wild takeover of DXC?  Let’s understand the burning platform driving this

When the first major tranche of IT support deals evolved to a heavy dependence on India as a delivery location to exploit lower-cost labor at scale, made possible by the original Internet revolution. In the early days of the offshore era, the more ambitious traditional IT services firms, at the time, developed their own global delivery models with the goal of staying relevant, in the face of emerging competition from the “Indian Pure Plays” (as they were known in those days).  This included the likes of Accenture, Capgemini, HP, and IBM – all of whom invested in India to attempt their own flavor of global service delivery with “added value” that the IPPs – at the time – could not (yet) deliver.  The traditional IT service firms which failed to invest effectively in the global delivery model, once-great brands such as ACS, CSC and EDS, all got acquired by traditional western outfits.  And the IPPs which failed to break into the Indian Top Tier eventually got rolled up into the second tier of traditional IT services shops, desperate to keep competitive, such as Patni, IGATE, and Syntel.

Getting to the point of this little history lesson, we need to understand the motivations behind these acquisitive moves.  Phase 1 was all about cost, scale, growth, and profitability as IT services firms could save the Global 2000 billions of dollars by exploiting cheaper talent at scale.  If you weren’t in the game of pulling the cost lever – and adding above-average value somewhere to justify yourself to your clients – you either made a graceful exit to a willing suitor adding you to their own scale game – or chose to tread water and watch yourself get progressively smaller and desperate, until you got to a point where nones wanted to buy you anymore.  I’ll share these firms’ identities over a drink if you can’t guess who there are already.

This new era of services (Phase 2) is seeing a clear bifurcation between the bread-and-butter services of the years pre-Covid – namely standard IT infra, app development and support, and BPO – and the present-day transformative services that run your borderless, work-from-anywhere business operations in the cloud, dependent on deep skills in data science, process design, automation, and most importantly, business logic and training people to become digitally-fluent. You can read our HFS 2025 Services Vision here.

The drawn-out Pandemic Era has forced the route into the cloud; it has forced processes to be re-designed and automated (or re-automated); it has forced enterprises to embrace rapid change, and it has forced the leading service providers to put their money where their mouths are or face a painful drain-circling experience as the bottom falls out of the traditional services model.

The new leaders in Phase 2 of IT services are rapidly emerging – and these do not include Atos and DXC.

IBM is spinning out its legacy infrastructure business while Hyperscalers like Google are starting to win comprehensive cloud deals as in the case of Deutsche Bank. Furthermore, accelerated by the pandemic service providers are reorganizing their business around the cloud. In addition, we are seeing a spate of mega-outsourcing deals in the billions as the word’s fourth-largest economy, Germany, finally warms up to outsourcing by doing “big-bang” deals to the likes of Infosys, TCS, and Wipro, keen to exploit this market and strengthen for the expected recovery later this year, where we forecast growth of 5%+ across services markets.  Atos also got its piece of the action successfully extending its partnership with Siemens for another five years (see below), so this does beg the question why it needs DXC, as it clearly need to focus on making that shift from Phase 1 to Phase 2, and its very difficult to understand how a gargantuan merger is what it needs right now.  Simply put, this is probably the most complex services merger ever contemplated by two firms which do not have a great track record of large, complex mergers: Against this background, the announcements that Atos and DXC are publicly reporting a potential takeover of DXC by Atos – in the region of $10 billion – are very surprising, as both firms have been struggling to keep pace with the market leaders for years, and Covid has not provided any respite for either, although DXC has shown some signs of arresting its decline under the leadership of Mike Salvino now in his second year at the helm. Having providers officially confirming takeover discussions is highly unusual, which indicates a merger could well be inevitable if the numbers add up to the stakeholders that matter. Yet, the central strategic question is whether there is an opportunity to consolidate and scale lower margin legacy businesses rather than focusing on investing in innovation.

Rather than getting bigger, these services firms need to spin off their legacy businesses.  This proposed merger is illogical.

Currently, HFS sees little value in merging these two firms together, as the only potential value is more in scale and geography, as opposed to deep areas of innovation where both firms are struggling in this tough market.  The muted reactions from Wall St tell enough of a story already – this whole merger proposal smells like a consolidation exercise that could be even less effective than the carnage caused when HP and CSC merged to form DXC in 2016.  What’s more, Atos has struggled to derive much value from its major offshore-centric investment Syntel, so the chances of an Atos-led juggernaut of mainly legacy services business-lines being effective are highly questionable.

While we laud the value of OneOffice at HFS, this could be the antithesis version, with a hundred-plus ‘offices’ all grimly clinging to survival.  We believe the IBM model of spinning out legacy business lines from growth business lines is the smart way forward.  That is not to say a merged DXC and Atos could not pursue a smart strategy, but the simple fact that neither has done this to date gives us little confidence that they will.

So let’s take a look under the covers…

Atos and DXC are caught between a rock and a hard place: Losing out on recent large deals while having limited levers for margin improvement

The recent major contract wins of TCS at Walgreens, Infosys’ double swoop at Vanguard and Daimler, and Wipro at Metro paints a bleak picture. It is too simplistic to point out that some of these were asset-heavy deals as an explanation for the lack of success. In particular, in the context of Daimler, there is a strong cloud element and the synergies across the automotive ecosystem are immense in areas like supply chain, cloud agility and creating of data value. While in the Walgreens extension contract, a strong emphasis was placed on digital innovation. The key question for both providers is where revenue growth should come from as the anemic growth as Exhibit 1 highlights: 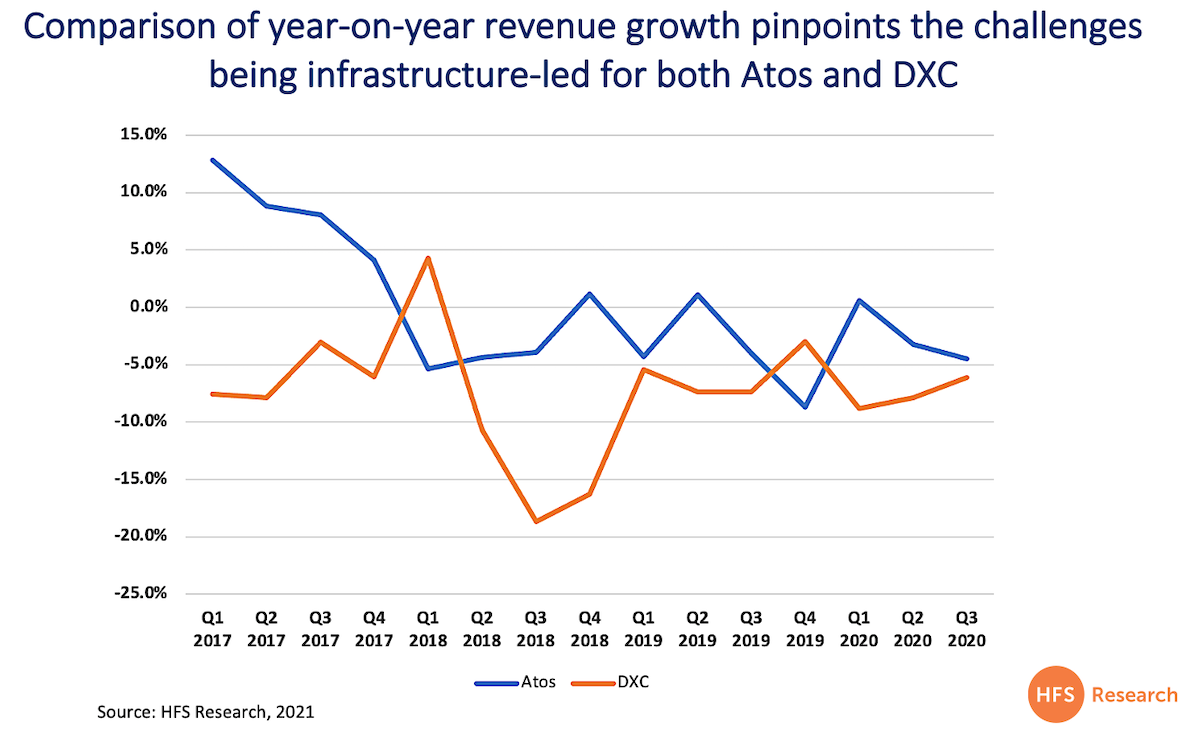 The deal logic appears to hinge on three pillars:

Atos has a solid track record in M&A. While Syntel might have been fluffed, it managed to extract value out of stagnated businesses like Siemens, Xerox, and Bull. But we see the deal at best as a defensive move that would be buying Atos management time for other strategic moves. While Mike Salvino has stabilized DXC, he has taken over an organization that was demoralized and exhausted after continuous excessive cost-cutting and management change. . His task ahead is perhaps best illustrated by a comparison of operating margins. IN Q3 2020 DXC was at 6.2% while Infosys achieved top in class with 25.4% and bellwether Accenture came in at 14.3%. Thus, the reported price of $10billion would represent a significant premium on a market capitalization of ca. $7.4bn that is likely to tempt shareholders to accept the offer.

Atos needs to reinvigorate around innovation – not legacy

M&A is in Atos’ DNA. The company is built on perpetual acquisition activity. The extension of the Siemens outsourcing contract in September 2020 is testimony that it can extract value even from highly challenging acquisition targets. Yet, DXC both in terms of scale as well as the culture would be its biggest challenge to date. The acquisition would also come at a time where the company is going through an organizational restructuring dubbed SPRING. With that  Atos is moving from a largely horizontal go-to-market to one that is focused on verticals. OneCloud will be the first practice for this new organizational setup. Atos is late with a move toward verticalization and DXC is more advanced. But the key strategic issue goes beyond culture and integration. With the deal, Atos would become a consolidator of legacy businesses. Yet as Accenture and the Indian heritage provider demonstrate, value stems from moving aggressively toward innovation.

DXC is still suffering from its own ill-timed M&A

With a certain irony, DXC is still suffering from its ill-timed acquisition of EDS in 2008 at a time when the outsourcing market was shifting toward more discrete deals with a strong digital flavor. The margin erosion in ITO and infrastructure projects is still haunting DXC. However, in sharp contrast for instance to IBM, there is no RedHat in sight which could act as a catalyst for change. Rather Mike Salvino has evaluated “Strategic Alternatives” for three business units: the U.S., state, and local health and human services business; its horizontal BPS business; and its workplace and mobility business. The public sector business has meanwhile being sold while the other two units will be retained. But this process makes clear that the whole business model is under constant review. Despite more targeted moves like for Luxoft, it appears unlikely that DXC could turn into a consolidator. Therefore, its strategic options are limited.

Bottom-line: The consolidation of legacy businesses will make bankers and executive management happy, but it won’t transform Atos

While Atos might finally get to get to scale in the US, the proposed deal lacks imagination as neither firm adds much of the new world to the traditional world. The offshore component of both firms is not compelling when compared to any of the leaders, the emerging market areas in the OneOffice platform, such as ServiceNow, Salesforce, Pega, SAP S4 Hana and Workday are not leading edge, and business process services investments across both firms have long been neglected. Yes, Atos management might be buying time for a more incisive transformation, but the strategic headwinds are already immense. Clients are looking for trusted partners to accelerate the Phase 2 services journey toward the OneOffice. Doubling down on legacy is hardly a compelling pitch to move up the value chain.