Software patents are a disaster for innovation.  The system is asymmetrical, in the sense that it is very expensive to defend against a patent suit.  At the same time, it is very easy to get a patent on almost anything, including things people have no business getting patents on.  I have a friend who was given a patent on a number, for example.  Fred Wilson called my attention to a video that is a great documentary on what’s wrong from the side of granting bad patents.  My friend’s number patent came about because he followed the letter of the law as described by the video and described some particularly complex mathematics that defined the number.

The asymmetrical nature of the expenses is such that there is a huge disparity in cost to defend versus cost to prosecute.  The last time I was involved in a patent suit with patent trolls (companies whose sole purpose is to use overly broad patents to extort payments from anyone they can, trolls don’t make anything except law suits), our counsel advised us that it would cost us $1M just to get to trial, so any settlement short of that was reasonable.  When I asked what it would cost the plaintiff to get to trial, the advisor suggested a couple of hundred thousand dollars and probably lays, since our patent troll was actually a public company with lots of cheap attorneys on staff and a cookie cutter system of prosecution.  This particular patent advised that any system that connected some sort of rule or program to a database infringed their patent.  By that definition, their patent covered SQL itself.  When I inquired why we couldn’t overturn the patent as overly broad, I was told this was the worst possible defense because it was the most expensive.  It would have cost us an estimated $4 million, and we had to consider the likelihood we might still lose the case.  The cost to get one of these overly broad patents granted?  $10-15K at most.

The supposed argument behind patents is that they foster innovation.  There are visions of big companies crushing the little guy and stealing her Intellectual Property.  Isn’t that what the system is supposed to accomplish?  This protection does not extend to any innovation.  Something trivial or obvious is not supposed to be protected.  There should have been some cost or sacrifice needed to create something very non-obvious before protection is extended.  Let’s tease this problem apart.

Someone writes a great script, “Gone with the wind.”  If it were patented, no one could ever create another script that remotely resembles that one.  It would be nearly impossible to write about the humanity behind the Civil War.  We don’t want that.  Those qualities were not the expensive part of creating the script and they are not unique or particularly non-obvious, although the elements may have been combined in relatively novel ways.  Still, the outline of the essentials could be made available in a brief Cliff’s Notes.  On the other hand, it wouldn’t be right to just take the script, grab some new actors and a camera, and make a new movie that was identical from the standpoint of the script.  The essential ideas can be easily conveyed in the Cliff’s Notes, but you can’t really produce the script from the Cliff’s Notes.  In fact, you’ll get a script that is different enough that it doesn’t infringe.  Therefore, the value is mostly in the literal copy, so it is the literal copy that should be protected, because that is where there was a considerable investment made there in writing the script.  Someone trying to get from Cliff’s Notes to script will spend just as much effort.  Note the asymmetry of effort and attaching the value to where the effort is.  We call the form of protection against literal copying a “Copyright,” and it is fair and reasonable to have copyrights to protect the creator of the script.  There are lots of media that behave like this and are most appropriately protected via copyright.

Now consider mechanical devices and machines.  It can be devilishly hard to conceive of the mechanism, to test it, and to ultimately have to build a number of prototypes to discover empirically what really works.  Recall Thomas Edison reminding us about all of the perspiration versus inspiration.  Minor variations on the original design can work just as well, or close enough that the value of the invention is greatly diminished by the “almost copy”.  Just as important, once you know the original invention, it is much easier to make a minor change and call it a new invention and have it succeed.  So such things need something broader in terms of protection.  You really can capture enough in the Cliff’s Notes to deliver most of the value of the invention so it can be knocked off and the original innovator loses their Intellectual Property which the knock-off artist has benefited from.  Hence this kind of IP needs protection of the Cliff’s Notes that extends more broadly to anything similar to Cliff’s Notes.  That’s what a patent is.

Here is a diagram that hopefully makes clear these relationships: 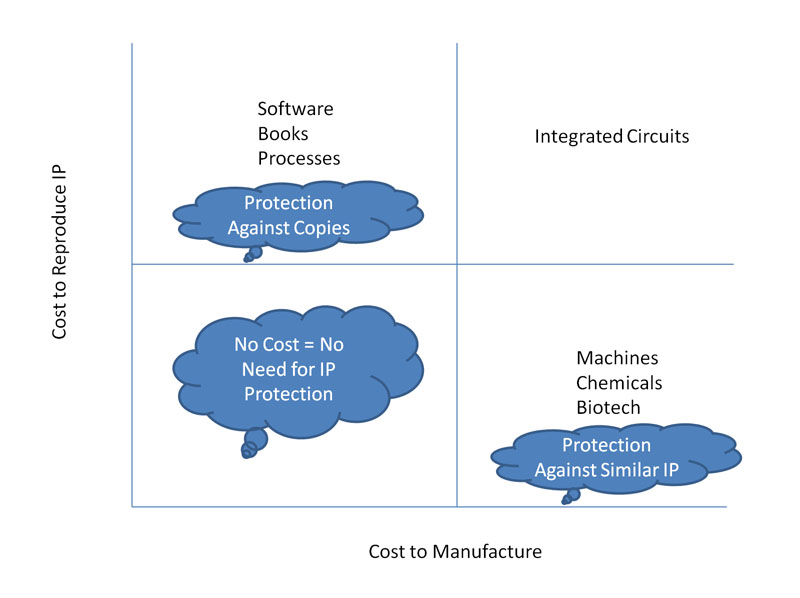 It’s really the right hand quadrants, those that cost to manufacture, that need the protection of a patent.  If I invent a new kind of fastener, for example, the philips head screw, it’s very easy for someone to take an example screw, make a slight change in the shape of the screw driver, and steal that IP.  Maybe theirs crosses like an “X” instead of a “+”.  That’s not fair, so we give broader protection.

On the left, we can run off copies very cheaply.  Anything that boils down to media goes here.  The protection has to be focused on the actual literal bits, because if we let them be copied, we give away the IP.  Consider I case where I actually had the source code of your program.  I can’t just copy it, so I determine I want to rewrite it in another language.  BTW, I can’t really get away with this any more than I can evade music copyright by having a different band play the same song.  But, that effort to rewrite in another language, get it right, have the software run just as fast, avoid introducing any new bugs, and so on, is expensive.  It is not an easy thing at all.  Hence we don’t need to work as hard at protecting it.  Protection goes where it is easy to take unfair advantage.

And of course we want to avoid granting monopolies (because that is what these legal devices do) to IP that is both easy to conceive and easy to reproduce.  If it’s so easy, it is obvious, and deserves no protection.  The other odd quadrant is the top right, which has elements of both.  An integrated circuit perhaps needs both copyright and patent.  I’m not familiar with that industry, but I would expect the layout on the masks is copyrighted and the various innovations needed to get the chip to work are patented.

When we give broad protection like patents to software (or potentially music and books), we wall off via monopoly very large amounts of IP territory.  This includes territory that the innovator never needed or perhaps intended to protect.  Territory that doesn’t matter in the least to extracting the value of the invention as it was originally conceived.  Such accidental monopolies are not good for innovation and are just legal lottery tickets equivalent to ambulance chasing.  This kind of protection should be eliminated as there is little evidence software patents are stimulating any kind of innovation whatsoever and lots of evidence it hinders innovation.

13 responses to “The Problem with Software Patents”