Back in March 2009, I received the following tweet from Dennis Howlett:

@choirshark @stevemann : I know you are all over Twitter, but your method is annoying, blatant pimp    crap

At the time I was creating SAP’s Social Media strategy so I wrote about it and in fact I was pretty defensive about SAP’s presence on Twitter.  I told Dennis that I thought SAP was at a cultural tipping point and that the company was evolving its market engagement model.  Well, today I received this tweet: 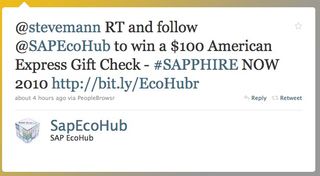 I clicked the link and was taken to a page on SDN: 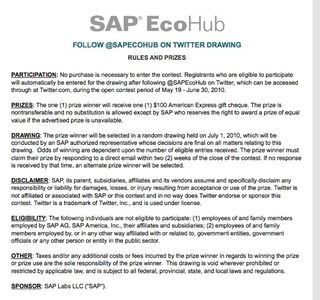 I was bummed and I immediately thought back to Dennis’ critique of the organization’s presence on Twitter.  Let me get this straight, if I follow @SAPEcoHub (SAP’s online marketplace) I’m gonna win a $100 American Express Gift Check???  Are you kidding? You are going to pay me to RT and follow you?   If we were accused of of pimping back then what’s this?

C’mon you’re better than this.  What’s going on?