There are three types of Graphical User Interfaces: First we had to interact with our early IT tools, as on our Apple IIs with Visicalc, then we had to face an ever increasing number of apps that made our screen into a messy desktop, and lately, the front end of process snippets on new and often smaller screens.

TUI, the “Tool User Interface” is the mature one. We’re now used to what we were served at first, as can be seen from the cries of protest when Microsoft moves an edit button from one place to another. Usability inevitably being measured by how easy it is to navigate by an old MS Word scribe.

In essence the TUIs’ purpose is similar to a well sorted toolbox when you go about repairing your car, or when taking apart your laptop to replace the hard drive. Sorted, “logical”, find stuff in the usual place with minimum effort and disruption to the task at hand.

A TUI as we know it.

DUI, the “Desktop User Interface” is still not quite mature, hence the theme of a million blog posts, thousands of UI web sites, “expert consultants” and even conferences. Now it’s about making the tool cabinet full of toolboxes easy to navigate.

In essence its purpose is to take a cluttered desktop with all kinds of tools, papers and sorting boxes and making them virtual onto a single screen so you can find the right toolbox, the right files and get going with whatever task you choose with minimum effort and no confusion.

It’s the UI of multi task “systems” like CRM, HCM, ERP, personal organisers etc., and not to forget operating systems.

Now, all business is about process and multiple tasks, hence the importance of DUIs. Problem with the current crop of multi task systems is that they have little or no process built in, it’s usually a matter of do-it-yourself – hence the need for all possible and impossible options being present at all times. 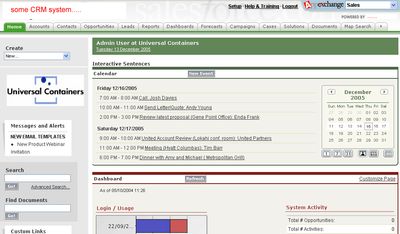 A DUI with about 150 clickable “buttons”.

PUI, the “Process User Interface” – so far the area of simple OS processes like “Install new printer”; pure step by step process, but as of lately, quickly spreading in the form of iPhone (and other mobile devices) apps.

Now it becomes interesting as a process can be delivered in a different format; one step at a time, no need for all options at all times and the interfaces can be two buttons, three choices or some fields to fill in – all with a “Next” or “Submit” button on the bottom leading straight to the next interface – yours or somebody else.

It changes the whole understanding of what a UI is even if some have touched upon it: Google; one logo and a simple search field in the middle of a white screen. Twitter began with a list of messages, a reply button, a message field, send. Wait for somebody else to reply. OK, not much process there, but two or three steps is still a process.

Now imagine business or enterprise apps that are process based, not single task items knit together by DIY process: An app that can pick up an idea, issue or request and run it through an unpredictable process that might look like a ball of yarn all the way to an implemented idea, a solved issue or a happy customer.

For these, forget DUIs and TUIs, think PUIs. Imagine wizardly step by step, think two choices and a submit button, think that you will get exactly the information and the choices to make, or fields to fill in at the right time, then add what the iPhone and now the iPad has done to interface thinking.

That is the future of business and enterprise apps and UIs. Bye bye to a million blog posts using the term “intuitive”, hello “just do it”.

Thingamy is a business/enterprise app like that, so that’s exactly what we’re tinkering with now – dumping all notions of DUIs, going pure PUI. In a month or so I might give you a glimpse of what the future of business/enterprise UIs might look like. No confusion, just-in-time and just-what-you-need information and functionality. Ugly or not, pleasing colours or not, rounded corners or not – different issues altogether, all secondary at best.

3 responses to “Three types of GUIs – past, present and the future”