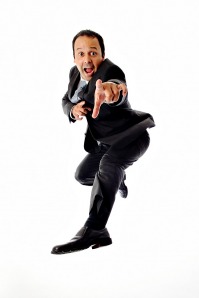 It’s become all the rage to talk about the Consumerization of IT in the last few years.  There are a lot of definitions of what the term means.  Those who are looking to downplay it somewhat will

A stable neologism that describes the trend for new information technology to emerge first in the consumer market and then spread into business organizations, resulting in the convergence of the IT and consumer electronics industries, and a shift in IT innovation from large businesses to the home.

Okay, that’s a bit much (stable neologism?).  In 2005 Gardner said it would be the most important trend of the next 10 years of IT development and that, “the majority of new technologies enterprises adopt for their information systems between 2007 and 2012 will have roots in consumer applications.”  Better, but this all misses a larger point:

What drives Consumerization?  Why is it happening?

If we could understand that point, assuming it’s more than just business software companies being bankrupt of ideas, we might start to skate where the puck will be instead of where it has been in the consumer markets.

Consumerization happens when the consumers have choice in any market causing the market to have to leverage the user experience of its consumers to make them more satisfied.

Steve Jobs “consumerized” what was already a consumer market, the music industry, by leveraging a far better user experience in the form of choice, instant gratification, and the ability to manage that choice more easily.  Thus was born the iPod and the digital music industry as we know it today.  He radically improved the user experience for telephones with the iPhone, and before either one came along, the Macintosh improved the user experience for personal computers.  Netflix did it for movies.  Amazon did it for retail and especially books.  These are all consumer areas that were further “consumerized” because the digital everyone always connected world meant consumers had the choice to adopt a better user experience.  And they did so in droves.

What’s happening with IT is the realization that workers are consumers.  They’re consumers because they have choices.  Choice is what begets the opportunity for consumerization in most cases.  If we have to do something because we have no choice, why bother improving the user experience?  But, if there is one thing that has radically changed in Modern Society, it is the prevalence of choice in all things.  People no longer work for the same company their entire careers as they once did.  They do not expect to be doing the same job their entire careers either.  They have choices, and when they have choices, it’s important for those who depend on the outcome of the choices to pay attention.

It used to be good enough to save someone somewhere a little time with a piece of Enterprise Software.  Most of this software boils down to fill in a form and move the contents of all those fields around from database table A to tables B, C, and D.  We may make minor transformations to the information along the way, and we may even review the information at some later date in a report.  It’s a solitary pursuit though, and not much fun.  Not much of a user experience, either as anyone who has ever had the sort of job where you fill in such forms all day every day can tell you.  These applications are data assembly lines where the knowledge workers (to use that quaint old term) are the modern blue collars.  Guess what?  If you give them a choice, they’d like to have a better job.  They’d like to add more value and not just be blue collared cogs on your data assembly line.  They want to use their minds, have some authority they own where they make decisions, and they’d like a chance to collaborate with their coworkers.  They want to understand how their contribution fits into the corporate mission so they can take pride in it.  And while we’re on the topic of taking pride, they’d like others to see their work as something meaningful and valuable.  Hard to do that if you’re just punching data into forms all day.

How can business software do this?

It’s easier than you think.  Let’s take one of the most painful jobs out there–handling Customer Service.  My last company was focused on this problem.  The traditional Enterprise Software solution is part of the CRM space.  It involves what we’ve been talking about–a customer gets in touch and a “Trouble Ticket” is opened up.  The Service Rep fills out the ticket, and pretty soon we’re moving data from Table A to Tables B, C, and D.  Tickets get closed.  We track whether we responded within SLA requirements.  We collect metrics on our call centers.  And we spend a lot of energy trying to minimize the expense of all this to the business by making it efficient and tying Service Rep’s compensation to their metrics.  In the process we incent all kinds of bad behavior and generally piss off our customers beyond belief.  Service Reps have none of the things I mentioned.  They’re not empowered to make decisions of consequence, they’re only there to try to get you off the phone and the ticket closed even if the way to do that is to frustrate you so much you give up.  They are not able to use their minds to any great extent, they stick to a script.  We’ve all talked to many of these people who know less about the product we have a problem with than we do.  They don’t get to create anything of lasting value, collaboration is minimized because it interferes with the metrics, and so on.  These are very hard jobs to take pride in, and I’ve been hearing since I first started in the software industry that Customer Service is not a destination career.  People get out as soon as they can.

To counter that depressing backdrop, we had a very simple idea that today is called Social CRM.  We realized after watching all this machinery in action that a much better User Experience could be made both for the Service Reps and the Customers.  The idea behind Social CRM (today a very promising market with companies like Lithium and Jive, not to mention Salesforce.com’s Chatter) is to change all those negatives using the Social Web.  No, it doesn’t mean literally copying Facebook or Twitter, and it doesn’t mean copying them either.  It means engineering a user experience for Customer Service that better serves the Customer Service Reps and their Customers.  Because both have a choice.  In this case, a better User Experience involves helping these parties to collaborate via social software with one another.  When a Service Rep closes a trouble ticket they (may have) helped one customer.  When they have a collaborative discussion in a forum, our data shows they helped an average of 16 customers.  After all, if one customer has a problem, others are likely to have the same problem.  There are genuinely few one offs.  And, if you can make it possible for customers to help themselves to the answer to the question because someone before them had already asked it, they actually prefer it that way in many cases because it’s faster.  If they get to interact with fellow customers along the way, if the Service Reps get to have the fruits of their labors visible to a broader audience, and all the rest that goes with a modern Social CRM application, that’s a better User Experience for everyone.

So I’m back to my original question:  When will your Job be Consumerized?

There is a wealth of opportunity in the Enterprise to start Consumerizing.  After all, we largely finished building the data assembly lines as a result of Y2K and the first dot-com boom.  The work is getting done more efficiently.  Now it’s time to take the next productivity step and help people to actually like getting it done.