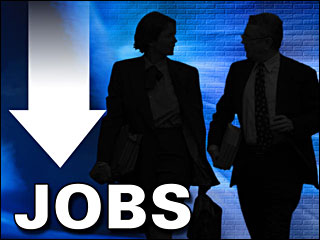 Fortune magazine has an article running that Techmemed about some advice Barrack Obama is getting about jobs from Silicon Valley Heavyweights like Kleiner VC John Doerr and Facebook COO Sheryl Sandberg.  They’re all about Education and Immigration Visa Reform as the path to creating jobs, along with plugs along the way for their own ventures.  Here are some quotes:

“We have to focus on our education system,” said Facebook’s Sheryl Sandberg. “We’re falling behind in every way possible.” Sandberg talked about what can be done to get more women in particular into high-tech jobs, such as giving girls more time with computers from an early age. “Let your daughters play video games,” she told an audience comprised of educators, entrepreneurs and investors.

Sandberg also talked about the role Facebook’s ecosystem of developers has played in job creation. While Facebook employs about 2,600 employees, she noted that there are 2.5 million developers globally creating applications for the social network. She added that Facebook has also given rise to entire new industries, like social media consulting.

Here’s the problem: this stuff has nothing to do with creating jobs in the kind of timeframe our failing economy needs them in.  We needed to be doing things a year ago that would line us up for massively reduced unemployment for the coming-sooner-than-you-think Christmas 2011 season.  We’ve missed that window, but we dare not let it go on for another 12 months, particularly not if President Obama expects to have a hope of re-election.

I’ve got nothing against letting our daughters play video games (I couldn’t stop mine if I tried, and she’ll be taking a swing at programming too after having helped her brother learn very successfully) nor against education (some personal news on that front before too long I hope!).  The problem is we can’t wait on the time it takes for education to work.  This economy needs help right now.  We need results in less than 12 months.  I want President Obama to keep Education as a major initiative that his Administration stays behind 200%–we absolutely need to do better in this country.  But job creation needs to be even more urgent, especially now that the original bets placed on stimulus have failed to pan out and the new deal needed to raise the debt ceiling is going to reduce the potential for even more stimulus as a tool to get the jobs engine going.

The truth is, the government has been betting on the wrong horses for job creation.  The Dems want Big Government and the Republicans want Big Business to do it (Big Business is largely who wants the immigration reform being talked about, tell me how that’s going to create jobs Right Now in the Good Ole U S of A?).  They’re both entirely wrong.  Neither Big Government nor Big Business has ever done much good by way of job creation.  Big Government fails because we can’t afford to hire everyone without a job and put them on the dole.  The whole point of the debt ceiling compromise is we’re already spending too much on government.  And Big Business has an ongoing record of fail.  During the 2000′s when they had everything just as they like it–the least regulation and taxes ever–they managed to eliminate 2.9 million jobs in the US and move 2.4 million overseas (according to the pro-business WSJ).  If they eliminated a net of 2.9 million jobs when they were booming, imagine what good they can do for us when things are tight?

I’ve been skeptical about the President’s Silicon Advisor group before.  The problem is that only small businesses create jobs in this country, and while many of these advisors may have started with small businesses, their interests have moved on.  That’s no knock on this group of advisors, they’re all smart people, I know many of them, and we are all products of our experiences.  Heck, I’m glad they have the President’s ear, but when I hear their primary advice being education and immigration reform to create jobs, I know the President needs some additional advice from somewhere.  We simply do not have time to educate ourselves out of this morass.

Let’s go over the data, one more time, on where job creation happens.  It’s been well established for a long time that small companies are the engines of job creation in America.  This is not just supposition, and it’s not just a little bit true, it is well-documented and a huge difference.  See for example this data from Jeff Cornwall: 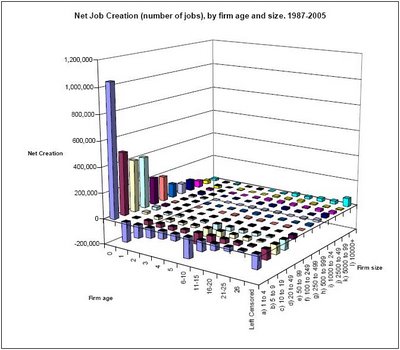 The columns represent net job creation. The big giant spike that’s doing most of the work is for new companies with less than 50 employees.  A little deeper analysis is available here, and goes back all the way to a study published in 1979 before we were so worried about the impact of China on the job market.  The OECD has a particularly in-depth white paper on how public policy impacts the small firms that are the drivers of growth.  There are many other such write ups.

It isn’t all that hard to understand why we have to rely on small companies to create jobs.  After all, many of the things that result in fewer jobs are unique to larger organizations:

–        Small companies don’t have huge piles of captive profits overseas that they can’t repatriate for fear of paying taxes on them.

–        Small companies don’t spend a fortune automating in order to get by with fewer jobs.

–        Small companies don’t have billions in the bank and billions more for shareholders to squabble over.  They spend every penny to keep going and growing.

Small companies just don’t have the critical mass to cut jobs.  They’re too busy trying to grow and generate the critical mass.  Based on that data, if we want to fix the jobs problem, we have to do everything we can to enable small businesses to get started and to grow as quickly as possible, and we have to do it NOW.  Every dollar we spend, every day that goes by, without focusing on helping small business, is a day and a dollar we have lost as our economy worsens.

Who are these small businesses?  They are the restaurant owners, small retailers, garages, machine shops, little manufacturers, florists, bakers, candlestick makers, and many others.  They’re the people with that scary gleam in their eyes.  You know, the ones that just never fit in at a Large Organization–the geeks and rebels, not the Armani-clad scratch golfers.  They’re the ones who don’t get much respect, like Rodney Dangerfield, but who actually built this country.  For the most part, the Big Ideas come from them.  Ironically, once they get big, they quit having so many Big Ideas and settle down to fine tuning the numbers.  That’s when the Outsourcing, pay cutting, automation, and job elimination cycle begins.  Unfortunately, once they’re big, they represent the kind of concentration of power and influence that politicians crave.  After all, it’s much easier to do dinner with a few Movers and Shakers than it is to talk to 1000 entrepreneurs about what might help them, yet the latter is what will produce the jobs we so sorely need.

The thing is, we now have the power to talk to those people just as easily as sitting down to dinner with the Movers and Shakers.  We didn’t used to, but the Internet has changed all that.

Here’s what I wish the Silicon Valley Digerati advising the POTUS had said instead of focusing on Education and Immigration Reform:

Mr President, in addition to our small advisory group, you should be putting together a Virtual Job Creation Council filled with small business owners.  Our companies, which include Social Networks like Facebook, can help you do that.  In fact, we believe it’s our patriotic duty to do that, we understand the Internet, and we know how to use it to democratically crowdsource all the ideas and initiatives you need to kick-start these small businesses into the job creation engine this country so sorely needs.

We’ll get you the ideas, and we’ll rely on you to make them real.

Aren’t you curious to know what such a crowdsourcing initiative might turn up?  Don’t we sorely need some new ideas to move forward, get inspired by, and break the gridlock?  Isn’t this the sort of thing Silicon Valley would be proud to be doing for our Country?

How about it guys?