Since Apple introduced the Siri personal assistant with the new iPhone 4S I have read several blogs how much better it is compared to Google Voice Search or to GPS and other voice recognition products. How about compared to IBM Watson?

IBM has marketed Watson’s natural interface for months now after its impressive Jeopardy! performance but there are few, if any, commercial apps yet. And when they have them ready you know there will be a healthy and expensive dose of their services.

It reminds me of the scene from Raiders of the Lost Ark where the swordsman makes a lot of noise, and Indy just pulls out his gun and shoots him. That is Siri to IBM’s Watson. Usable, affordable, nimble…

So, I read Steve Mills of IBM saying they will be pursuing application acquisitions – a reversal after decades of deemphasizing products like MAPICS and instead partnering with vendors like SAP.

I just hope they don’t keep bringing knives and swords to gunfights! 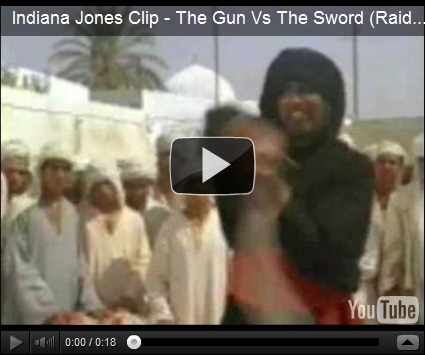