Trace any economic good to its source and you will find an ecosystem natural resource whether it’s sand for making silicon wafers, energy for baking them or the brains of people who build and program them.  More than this, there are also economic rules, like the Jevons Paradox, that correlate energy use to increasing economic activity.

In the last five or so years there has been increasing talk about limiting factors in economic growth, peak oil being the most obvious.  There is only so much oil in the ground or, another way to state it, the earth is finite and so is the supply of crude.  Without a limitless supply of cheap energy to fuel economic growth the economy would cease to grow, as it almost has.

This is the context for reviewing Oracle’s quarterly report, which was delivered yesterday.  Although the company managed to make some money it badly underperformed compared with analyst projections.  You can get the details here my point is not to review them but to analyze their meaning directionally.

I believe this miss combined with the lackluster performance of many traditional software companies in recent years represents a plateau forming for conventional software.  The economy is barely growing and absent growth many corporations have much reduced need for software or inclination to buy products that have notoriously long lives that demand expensive maintenance and labor to support them.  The software industry is a subset of the economy and if the economy is not growing software can’t grow for long.

To be blunt: the conventional software industry has peaked.  It will not go away but it will go sideways for a while.  The sideways motion will last as long as it takes customers to move the bulk of their processing to the cloud.  Since most conventional software companies have already introduced software for the cloud, you can expect a big fight for cloud dominance among them that will last for several years.  It will be a zero sum game as each company tries to retain its customer base and poach from the competition.  But during that time it will appear that the industry is thriving.

At the end there will be a robust industry that has nevertheless shrunk in real dollar terms because a subscription model will generate less cash on a recurring basis than the old license model.  Companies that will fare well in this situation are those that have already made a substantial investment in delivering cloud services and those that have aggressively sought out new niches, especially in front office business processes increasingly mediated by one form of socialized engagement or another.

None of this should be surprising.  A quick look at the growth of GDP over the last sixty years reveals an upward trajectory 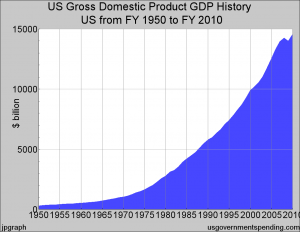 that resembles a classic bubble.  This was made possible by cheap and readily available fossil fuel.  Although growth appears to have resumed it is likely that a plateau is forming and that an asymptote is in sight.

To my mind the clear implication of all this is that the economic paradigm we have all lived in for virtually our entire lives is changing.  The question of the moment is how do we adapt?