It is rare that I get so excited about a new service I feel compelled to grab a smartphone and blog about it. But today it just happened: the service I’m going to talk about is Quicktate.
For background, let me just come clear and admit that I’m a really lousy typist and as such I’ve been searching for the ideal transcription / dictation  software forever,  probably going back at least a decade or more from  early versions of IBM Viavoice to Dragon Naturally Speaking.  The current 11.5 release of  Dragon is actually quite good in its recognition capabilities, except for a small (?)  problem that I have:  a fairly broad accent spoken by a population too small for Nuance to tune Dragon to:-(.   Other than that, Dragon is  quite picky in terms of sound quality, i.e.  the microphone you use, background noise etc.  So it is good,  helpful but is certainly not the solution for those odd 5-10 minutes when you are waiting in a  noisy place and all of a sudden have a productivity rush of ideas you just have to jot down.
Well, this is where Quicktate is shining. It exists as a stand alone service but what’s really great is the integration with Evernote (which, if you are not yet using, you don’t know what you’re missing, so I am telling you to start NOW).  Having settled that,  you are now an Evernote user,  so go ahead and find  Quicktate via the Evernote trunk. Pick one of the 2 subscription plans or I pay-as-you-go if you prefer but it’s likely to be more expensive.  Now,  authorize Quicktate to have access to the voice notes  you create in Evernote (this only gives them access to the voice files,  not any  other type of information).
Having done that, all you got to do is pull out your Smartphone and create a voice note in Evernote. When Evernote syncs to their servers, Quicktate will extract the voice file and within minutes (at least for shorter notes) it will transcribe your voice note into written text.  Transcription is not via voice recognition software, it is performed by humans so you can expect better accuracy (even with my broad accent).  A few minutes late, or at the next sync,  the text information is inserted back to your original Evernote. End of story.  Extremely convenient. I should say finally  user friendly, convenient transcription service has arrived.
The only part  I’m not certain about is how economical this service is in the long run, given that pricing is based on word count and frankly I have no idea about the  number of words I would dictate in a month. 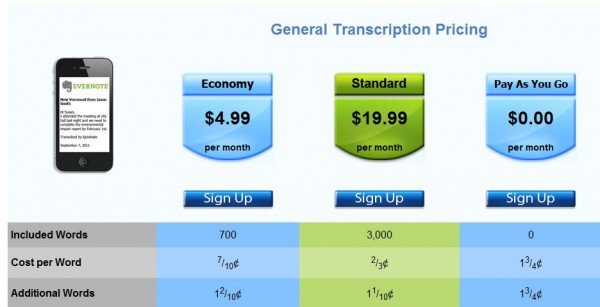 The only other thing is perhaps in the next release  I would prefer a slightly better integration into Evernote.  What we have now is really close to perfect. It’s highly  automated  – perhaps a bit too much.  Once you complete authorization, Quicktate assume you want all your voice notes to be transcribed,  which may not always be the case.  The work around for now is that before you create a voice note, you have to use tag your note with a special code to indicate  you don’t want to be transcribed.  That’s a bit ugly,  I would much rather see a  button integrated within Evernote which would allow me to explicitly send my notes for transcription when they are ready.
That said, I’m glad to have found this almost perfect service. If you are an Evernote user and if you often  have a lot of mental notes that you don’t have a good way of recording, then you owe it to yourself to try it out.
(P.S. this post was transcribed by Quicktate)