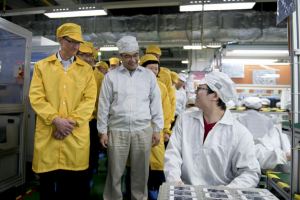 A number of articles have been written around the question of why Apple doesn’t do more manufacturing in the US.  After all, its super high tech products are produced in huge volumes that create thousands of jobs and our country could use those jobs, especially in the manufacturing sector.  The iPhone production line at Foxconn’s Zhengzhou Technology Park employs 120,000 people, so a lot of jobs indeed are at stake.

Great stories abound of Apple going to extreme lengths to create the world’s most potent supply chain, to the point where it has become a powerful competitive weapon.

For example, in 1998, Apple bought out all available air freight for Christmas 1998 to ensure that the company’s new translucent blue iMacs would be available.  This was done at a cost of $50 million, and the move handicapped rivals like Compaq that got to the party late, wanted to book space, and found it had already been sold to Apple.  When Apple wanted to make the little green light appear next to the webcam on a MacBook, it bought hundreds of $250,000 laser machines to drill the tiny holes in the metal.  I marvel today at the light that appears on my own Macbook when the lid is closed and it is sleeping.  The holes are literally invisible they’re so small.  It’s as if the light shines right through the metal, which in a sense, it does.

With the ability to invest so much, why aren’t more Apple products made in the good old U, S, of A?  Why isn’t Apple creating more jobs here?

Rather than just admit they do it overseas because American workers are unwilling to sleep thousands in dorms while working around the clock 12 hour shifts, so therefore it is cheaper for Apple, Cook has a more savvy response.  He blames it on a shortage of skilled workers:

All the remaining American tool-and-die makers–a key profession in preparing to make high volume products–could hardly fill the auditorium in Rancho Palos Verdes where the event was held, Cook said. In China, those skilled in that trade would fill several cities, he added.

And that is Cook’s reality distortion field hard at work.  I’ll give you some counter arguments.

First, if there really is such a critical shortage of these skills, why are so many out of work?  How is it that the US Aerospace and Defense industries manage to produce so many of the world’s highest performance and highest tech products from stealth fighters to nuclear submarines to missiles to drones?  The products produced by this industry are coveted by every country on the planet.  Are we really to believe that we can produce stealth fighters and nuke subs but we don’t have the skills to make iPhones?  That beggars belief.

Second, if there are so few machinists available, why are so many participating in online communites and sites ranging from professional sites like Practical Machinist to amateur sites like CNCZone to hybrids like my own CNCCookbook?  I get over 1 million visitors a year to my little site.  Sure, some are from overseas, but very few are from China.  Most, in fact, are from the US.

Third, how is there such a strong Maker movement in the US and so many domestically created products on Kickstarter if this is all dead and dying in the US?

The answer is simple–Cook is talking balooney.  It ain’t true.  This is not about skilled tool and die markers, this is about having 8000 workers who are willing to roll out of bed, take a cup of tea and a biscuit, and jump onto a 12 hour shift to adapt to a last minute design change Apple mandates.  It’s about dealing with a country whose factories and workers are subsidized to the hilt by the Chinese government and by the substandard conditions these workers toil under.  It’s about having the Chinese government invest capital so Apple doesn’t have to.

In fact, Cook’s message about a lack of skills is really just parroting what Steve Jobs told President Obama:

It isn’t just that workers are cheaper abroad. Rather, Apple’s executives believe the vast scale of overseas factories as well as the flexibility, diligence and industrial skills of foreign workers have so outpaced their American counterparts that “Made in the U.S.A.” is no longer a viable option for most Apple products.

Then again, perhaps Jobs was parroting Tim Cook, who is the man credited with moving Apple manufacturing from domestic highly automated factories overseas.

Lately, the New York times and others have cried, “Foul!” over worker’s conditions in China, but I have not seen anyone calling “Bull!” on Job’s and now Cook’s claims that the skills simply don’t exist in this country.  There’s a lot more reality distortion and dust-raising-skuffling going on too.  No end of blog posts about why Apple should take this on  when other companies like HP, GE, or IBM heven’t.  Or whether it is Apple’s responsibility or whether it is fair to ask Apple to play on a field made uneven by competition.  There is hand wringing over how much good is done for workers in China who might otherwise be much worse off and whether it is fair to ignore their plight versus domestic workers or jobs created for retail clerks in Apple’s stores.

That’s more Balooney and hand waving–Apple is now investing in improving worker’s conditions and its margins are so large it can afford to do far more before any competitor has much of an advantage.  Why can’t it invest in recreating manufacturing that works in this country?  Imagine what an amazing and productive paradigm shift that would be?  Wouldn’t that truly be a “product” that Tim Cook, master of operations and supply chains, could be proud of in the same sense that Jobs could be proud of his fantastic innovations around personal computers, phones, and digital music?

I’ll leave the subject with one last counter-argument to this tale of how woefully inadequate US manufacturing is to the task.  Take a look at Germany.  By all accounts it should be far less competitive than the US in manufacturing.  Taxes are worse.  Regulations are worse.  Wages are higher.  Yet, Germany’s manufacturing economy thrives.  For more insights on why, see my blog post over on CNCCookbook.

Nobody there will sit still for the argument that there just aren’t enough skilled Germans to do the work.  We shouldn’t sit still for that argument either.  We’ve penalized countries in the past for dumping products here to decimate competition.  How should we deal with dumping cheap wage workers for the same purpose?