Humanity has developed by leap and bounds – when we learned to fish the new ample source of protein increased the human chance of survival and forwarded our development, we became smarter and stronger over time.

With fire we started cooking the food and hence made it easier to digest leaving more energy to be spent on hunting and gathering. Again humanity increased its chances of survival.

Then came the “ages”, times when technology and methodology allowed humanity to move forward in great leaps:

The hunter gatherers moved on to the agricultural society and the effect over time was excess food production allowing to feed a few to spend time on thinking and fighting on our behalf – philosophy and wars ensued. As did cities and structured societies.

With industrialisation we had another leap forward, the productivity increase was again dramatic and the whole world gained. Enormous excess wealth was produced, and even more people could spend time on services instead of producing food and goods. More healthcare, more support services, we could even afford to universally support the elderly with pensions.

Now we say we have entered the “information age”, and expect similar results. But is it comparable?

The hunter-gatherer on his daily forays might have found that certain trees and bushes yielded more or better fruit and berries, or patches of land that made for better roots and vegetables. At some point he must have tried to keep the tree, bush or patch free from competing plants resulting in an increased yield. And with luck that favourite bush would spread and soon he had a proto-orchard on his hands. In short food gathering efficiency increased – “how” he did things changed, but “what” he did remained basically unchanged.

We can only speculate, but his newfound increase in available food would soon become a given with matching consumption patterns. And still he was chasing pigs and birds in the wild.

With humanity’s urge to move forward, maybe triggered by a surprising new growth of berry bushes “behind the outhouse”, some ideas to change the overall methodology may have transpired: Instead of distributed food “production” along his old gathering paths a patch of good land was selected and he moved his bushes, trees and veggies there so no more time would be spent on walking, carrying and keeping and eye on a wide area. Some pigs followed to breed inside a fence for a subsequent easier “hunt”. In short “what” he did changed and the overall effectiveness increased and we had entered the agricultural society. The “how” we did things just became a daily refinement task, a bit hygienic, a part of the daily chore.

Much later the steam engine was invented. It very quickly and efficiently replaced muscle power in mundane tasks like hauling ore and coal to the surface or running production machinery. A huge bump in efficiency was the result – “how” we did things changed while “what” we did remained the same.

But as always the margin growth flattened out again and consumption caught up with the newfound wealth. Then came Mr Ford who in 1913 went one step further and installed the first real assembly line. Now the task, information and tools were delivered to the worker without any need to go look for, fetch or await orders from the foreman – one could claim that management was automated while the actual value creation work did not change, still using the same parts and tools. Within one year one man could produce 8.7 times more cars per hour thanks to a huge increase in overall effectiveness but very little in efficiency: “What” he did changed; no more looking for stuff, no more meetings, just screw the doors on. The “how” he did things, how the door was attached, did not change at all.

In other words – there are two phases each time we go from one “age” into the next:

And note the important learning that phase 2) did not happen until the marginal gains from 1) begins to flatten out.

Let’s use the above core principles to analyse the claimed “information age” that we’re supposed to be in:

With the first practical IT technologies some 40 years ago some souls found ways to make how we did things way more efficient. Book keeping, keeping tabs on the inventory, writing letters, and calculating things now took seconds and not days. Communication followed suit. Efficiency gains from “how” we did things differently became obvious and all the world’s wealth creation had a multiyear bump so politicians could sleep well assured of no recession looming. Taking a cue from history, at some point in time we should expect the growth curve to flatten while consumption catches up with the gains.

And that ladies and gentlemen, is exactly where we are today. 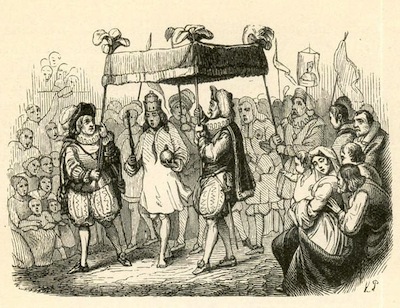 The “what” we do has not changed much; still we have meetings with action items, still we have to write reports, still we have an accounting department to organise the results, and the good old hierarchy is still there to channel the information- and work-flows.

And the growth curve, the marginal gains, have been exhausted: Not much gain to be had by upgrading your ERP system model 8 to model 9. Not much to be had from installing the latest word processor or email client – except for better ways to handle the ever increasing new problems like spam and communication overload and data bloat. It seems that IT knows it’s about to hit a wall and are frantically adding airbags to their products.

We have reached the parallel point to when the first farmers were about to move trees and bushes to their prepared plot, or the point when Mr Ford was about to make a recombination of known technologies to get rid of the milling around, looking for stuff and waiting for foremen to dish out tasks.

But the IT industry has yet to realise that – they’re now completely absorbed in squeezing out the last margins, in the last hurrah, by making the old easier to digest – mobile, UX, big data, and cloud are the flavours of the day.

Now is the time for IT to refocus on the effectiveness of the whole value creation chain and “what” we do. Using the history teachings the next step now is to give the work a better framework so we can end those Monday morning meetings, reading and responding to hundreds of cc’d mails every day, the untrustworthy handovers, in general not spend 2/3rd of our time on making the flows move forward, aka managing.

Only then can we say we’ve entered the “information age”.

p.s. The figures are rather simple – knowledge work stands for about 60% of the world’s value creation while knowledge workers spend on average about 2/3rd of their time on managing the flows. If we could automate that management and spend that time on value creation instead – i.e. change “what” we do – we would look at approximately 120% GNI growth world wide. Which would be the same as the full world wide GNI growth over the last 30 years. Worth the effort perhaps?