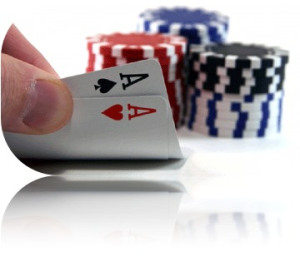 I’ve talked a lot about bootstrapping on this blog–I am a total convert, and I’m enjoying every minute of bootstrapping my own company.  There are many reasons for my enthusiasm.  Investors these days are going to make you take most of the bootstrap journey before giving you a dime being one of the biggest.  You’ve got to build a product, you’ve got to get customers, and you even have to show some kind of decent momentum.  No more raising money on a slideshow idea and a team.  No more just build a cool product and get money.  You really do have to go quite a ways on your own nickel.

Yes, there’s a little bit of seed money to be had, but what are you really getting for that?  What is that transaction all about?

In the end, it’s about getting very meager wages in exchange for handing over a lot of equity and control to some strangers you’ve just met.  Are you really that concerned about a job?  Should you really be calling yourself an entrepreneur if you are?

I like the 37Signals take on the whole bootstrap thing.  They simply ran a consulting business to pay the bills and agreed amongst themselves they would each contribute 10 hours a week to their startup and they’d make sure it was a solid 10 hours.  By following that journey they produced not only the Basecamp product but Ruby on Rails as well.  Yeah sure, not everyone is as brilliant, but that’s not bad for having paid the bills through consulting.  Why do you need to raise capital again?

Whatever your thoughts on needing the capital, Sarah Lacy delivers one more crushing reason to find another way:  the Series A Crunch.

Folks have been talking about the coming Series A Crunch for a long time.  There simply is not enough later stage VC to support all the thousands of seed companies that have been started.  Lacy says that people she’s talked to suggest only about 20% of those seed companies will get another round.  And trust me, not a heck of a lot more will get the Series B after that.  There’s never enough money for the next stage simply because that’s how the plan works.  The plan is to provide as little capital as possible, get as much control as possible, cut off anyone who doesn’t produce phenomenal results, and then double down on a the very few that are left.  Rinse and repeat until you get to IPO’s.  Growth less than 2x a year is not tolerated.  3X is about right and more is better.  You will be stack ranked against the other deals the investors have seen constantly.

Mike Maples says that every year there are 10 awesome companies created.  John Collaghan of True Ventures says there are about 2000 companies a year getting seed money.  Let’s run the numbers.  For a Consumer Internet play, we’re talking perhaps 5 years and for an Enterprise SaaS play let’s use 7 years.  Further, let’s say we raise enough for 18 months each time.  This is an easy problem to set up in Excel, but I will save you the trouble.  To go from 2000 to 10 in 5 years means 4 18 month rounds and only 17% of companies are getting funded each round–that’s pretty close to the 20% Lacy quotes.  To go from 2000 to 10 in 7 years means only 35% are getting funded.  I’m not surprised, it’s easier to show steady progress in an Enterprise SaaS deal whereas Consumer Internet is more of a hits business.  What you have to keep in mind is the winnowing rate is going to be much worse on the early rounds.  The VC’s have a much lower sunk cost, it is concentrated with fewer investors, and you have a lot less to show for it.  At the later stages it’ll be a lot easier to argue the company is just fine tuning for some minor challenge or other, but that the market and product fit for that market are well proven.

BTW, whichever path you take, you are signing up for a lifetime of clearing some amazing hurdles.  What’s telling is that when asked about what happens to the companies that are merely “Good” and not “Great”, according to Lacy, Maples response is, “Screw ‘em.”  And that’s the problem for the entrepreneur.  Unless you are building a $1 Billion revenue company, and you’ll get the acid test with every round you raise, you’re going to work very hard for low wages and wake up one morning to discover you’re done.  The VC’s won’t put any more in.  The doors are closed.  Note that despite making the Founders millions, and continuing to pay off, with no Board to answer to, 37Signals is merely a “Good” company.  The VC’s would shut the doors on it or sell it off without a second thought.

Welcome to the “Unsustainability of Hyper Growth VC Startups” as I called it in an earlier post.

It’s a crazy world indeed where you can do a fantastic job building a “Good” company and have it be judged inadequate.  If you’re unlucky, you’ll be one of those companies that got to profitability and needs no further investment, but the company just keeps going and going, unable to pay out to the Founders like a true Bootstrap can and unable to achieve a Liquidity Event that satisfies the VC’s appetite.  They’ll be after you to sell the silly company out where their preferences will put most of that return in their hands or to take some extreme risks in order to pivot and have a shot at one of those $1 Billion opportunities.

Here’s a radically different way to think about the capital:

1.  You need to go most of the way through Boostrapping to start.

2.  If you wind up with the kind of wildly successful company that just might qualify to a VC as one of the 10 “Great” companies, you can always raise the money later.

3.  If you are measuring everything the way you should, you will know if you could’ve been “Great” without having to spend the money.  Remember, the VC’s were going to dole it out pretty slowly anyway.  Your biggest obstacle is you won’t have the capital to make it on an advertising model or to give away your product for years while you ponder possible ways to monetize it in your Ivory Tower.  Good luck with that stuff right now anyway.  Andreesen Horowitz VC Chris Dixon says 10 million users is the new 1 million and Fred Wilson says the late stage world is switching to Enterprise which isn’t ad-driven anyway.  Having to actually charge for your product is a small price to pay.

4.  Given all that, you’re not talking about an awful lot of personal investment to just build the company until it pays your bills.  If need be, you can follow the 37Signals plan and invest 10 hours a week.  You’re going to be either spending your savings or your spare time, but let’s face it, are you really an entrepreneur if that bothers you?

5.  Fast forward down the road.  You’ve done extremely well.  You paid your bills by year 2 like many Boostrappers have.  You have a company that has doubled beyond that every year for 5 years.  Maybe you did even better.  You’re sitting on a company with less than 20 employees (probably 10 or 12) that’s doing $6 or $7 million a year.  If you have something that could be “Great” in the VC sense, you’re probably doing $10-12 million or more.  Now if you really want to swing hard for the fence, go raise VC money.  Do it like the Github guys did.  Take down $100 million in capital.  Cash out $10 million for yourself and put that in the bank.  Keep running for that brass ring and be secure knowing whatever happens, you not only have the $10M, but you built the company the way you wanted without a lot of interference and you’ve had to give up far less equity because you waited.  Or, forget the VC’s.  Keep putting several million of the company’s $10-12 million a year in your pocket.  Keep doubling every year.  Don’t wait for them to say, “Screw ‘em” because yours is just a “Good” company.  Now you’re the one who can say, “Screw ‘em”.  And remember, the more successful you get, the more easily you can raise money or sell the company to a larger player.

It’s not bad work if you can get it.  Come on–you really going to take those Two Aces (a “Good” hand) and turn them in because you hope for a Royal Flush (a “Great” hand)?

One response to “The Series A Crunch: One More Reason to Bootstrap and Skip Venture Capital”