Sizing up social business for 2012

Without a doubt, organizations of all sizes encountered social media in more of its various forms last year than ever before. Whether it was the marketing team or customer care looking to expand the reach of their traditional channels to encompass where their customers have moved or employees looking for better tools to find each other and share knowledge, social media seeped deeply into how companies worked in a major way in 2012.

Anecdotally, with a growing complement of hard-won experience in the tools, technologies, and techniques of social business last year, companies are poised to have full contact with social media in 2013 like never before. From a statistical and trend perspective, the most recent data shows that we’ve now moved beyond the end of the beginning. Social media is no longer largely unknown and ignorable, but the exceedingly familiar and increasingly indispensable for many businesses.

However, as organizations experimented with and widely deployed social media in their various functions, 2012 also became an breakthrough year for teasing out the more intractable issues of the medium that are likely to vex many enterprises in the coming years. As companies grappled with the cultural, organizational, technical, and process issues that the open and participative nature of social media brought to the fore, we began to see some of the way through the challenges as well. 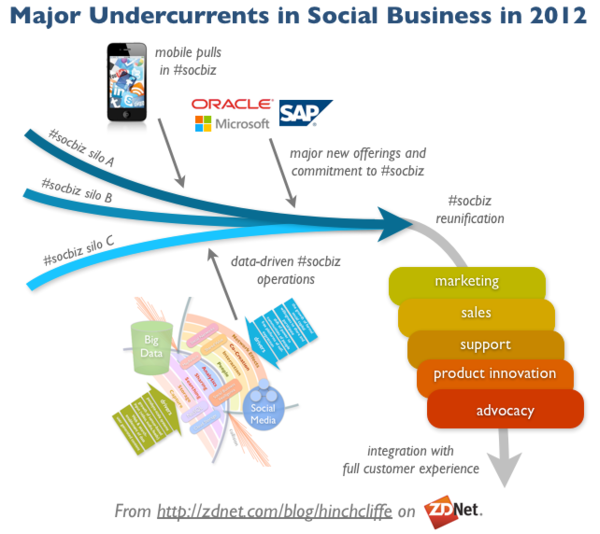 The social business software industry didn’t stand still in 2012 either, from a big vendor perspective in particular. New and existing players either made significant updates to their social business tools and platforms, or revised their go-to-market strategies and end-user solutions to match. Along the way, significant new niches established themselves within the space to support the unique needs of the enterprise, particularly around analytics, security, and compliance. Organizations also sought to scale-up their social media efforts as efficienctly as possible to get at the benefits in a meaningful way.

But perhaps the most important development of the year was the maturation and accumulation of experience in how to make social business work in large enterprises. The complex dance that early adopters were forced to learn in trying to balance the constantly changing social business landscape leveled out a bit finally in 2012. For once, the seemingly endless growth of consumer social media seemed to align better with their organizations’ own evolution through the early tactical experiments, subsequent pilot projects, and broader enterprise-wide adoption.

There are now signs of real maturity in the industry, such as the emergence of social media mission control rooms and well-funded centers of excellence, combined with real staffs and budgets, that are moving social media into the day-to-day operations of many organizations. While not all, or even most, organizations are quite this far along, a critical mass appear to be, and it’s encouraging that we seem to be headed in this direction overall.

The Stand-Out Social Business Trends of 2012

So, with all of this in mind, what did we see in 2012 that stands out in retrospect as an inflection point or major development in the realm of social business? From my analysis and end-of-year conversations, here’s what took place:

Where there other social business happenings in 2012? There certainly were, and you can find great roundups of these from industry analyst Michael Fauscette and Leanne Chase at The Community Roundtable. However, in my analysis, the five major issues above were the most impactful and relevant to social business initiatives overall. Organizations wishing to fast-forward their efforts can capitalize on these major crux points in the industry’s social business journey, and avoid taking the long route along the way to becoming more effective digital businesses.

What did you see as the biggest social business trends of 2012?