I have known Charles Phillips, CEO of Infor for going on 2 decades now. He was a polymath way before I wrote a book celebrating them. He has computer science and law degrees in addition to an MBA. He is on the board of a media company, a museum, a jazz organization and a charity. As a financial analyst at Morgan Stanley his prodigious reports and events (many with Mary Meeker, another prolific analyst) were sought after. In his 8 years at Oracle he helped craft a remarkable streak of over 70 acquisitions. He does not seek out easy assignments.

I must admit, though, when he announced he was moving in late 2010 to Infor, a roll-up of countless mature software companies, I thought he would continue the path of acquiring aging software companies for their maintenance cash flow.

But for two+ years, we had mostly seen marketing changes. A rebranding effort that CMO, Chip Coyle describes here. A gorgeous new corporate HQ in NYC’s Silicon Alley – see some of my photos here`.  The open/no assigned office/desk layout at the HQ and the traits of “beautiful” and “social”  in the branding gives it a startup feel. The imprint of the  internal creative agency,  Hook and Loop can be felt in many aspects of the operations but gave it even more of a feel of aesthetic play than a gritty, industrial-strength enterprise transaction processing play.

Finally, last week Infor unveiled to a group of selected analysts some of the product and customer progress they have made, with many details under NDA . The macro picture – $ 1 billion in new R&D,  over 5,000 new features delivered in 2012, 5 straight quarters of double digit license growth.

Micro-vertical functionality – While existing Infor assets had reasonable vertical allure like Lawson in Healthcare and Intentia in Apparel and footware, recent focus has been on “micro-verticals” and emphasis on features at that level.   So, instead of going in with more generalized food and beverage positioning, Infor can now go present shelf life management features to bakeries, and sub-lot traceability to  breweries. Rather than just  go with a Fashion offering, it can offer more unique features for sportswear versus uniform makers.

ION Middleware – The fundamental building block here is the Business Object Document schema for common business transaction types in the OAGIS which has been evolving over the last 20 years (see nice overview of the XML based interface specification here). This has allowed Infor to simplify integration between its wide portfolio of applications. It also allows customers to extend messages with industry specific overlays without breaking the basic BOD format. These messages get collected in a “Business Vault” available  for access by analytical tools, or via workflow and alerts be shared to a wide range of interfacing systems and for mobile and social access. 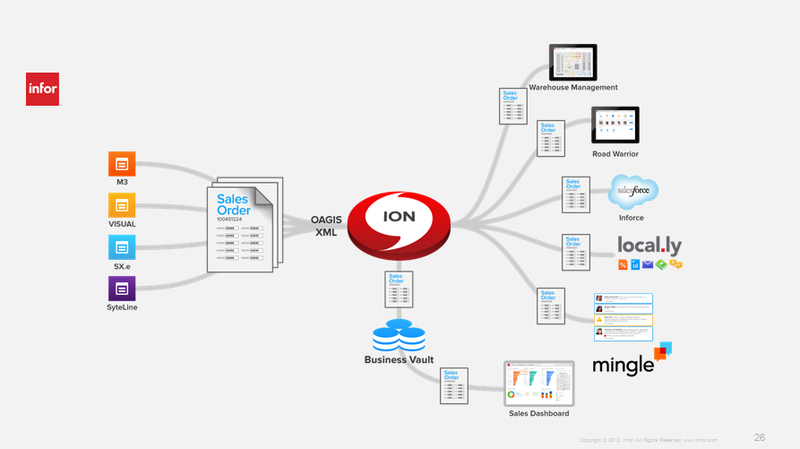 Beautification – This is where the Hook and Loop imprint really shows up. The blending of transactional and analytical fields relevant to specific contexts, the HTML5 homogeneity across various desktop and mobile platforms, the collaborative conversation capabilities across many screens all make for a pleasing and productive user experience. 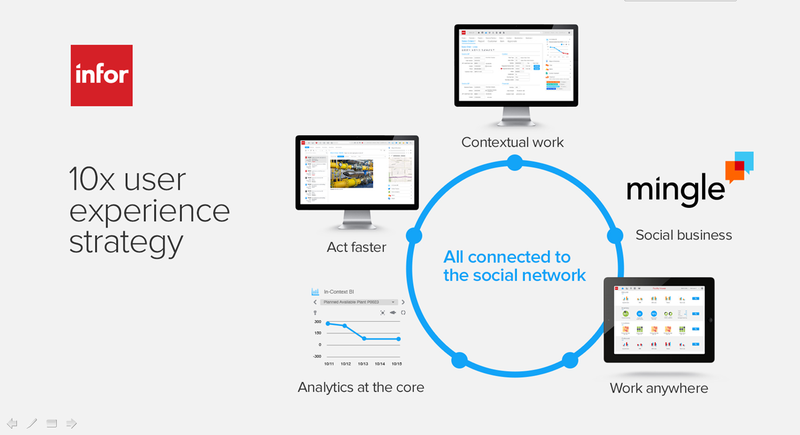 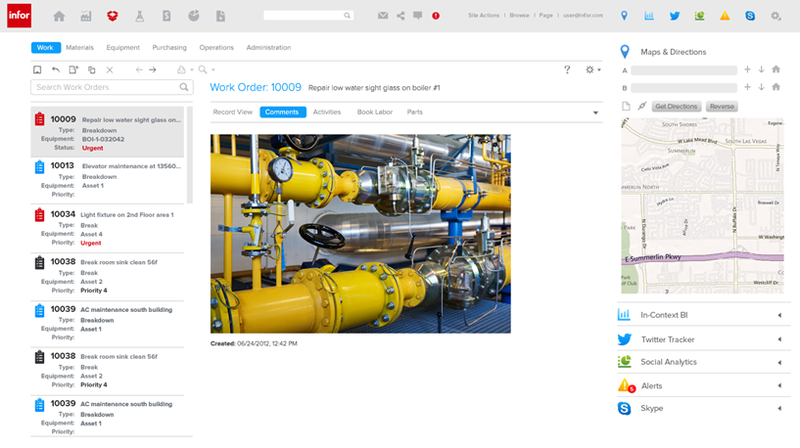 Modernization – continued porting of  many of  the older acquisitions like the Intentia Movex M3 product and the Lawson financials to Java, moving Syteline to .Net etc.

Advanced Analytics – One of the most exciting sessions, albeit with few specifics till later this year, discussed a variety of vertical “Big Data” applications. Unlike countless general-purpose advanced analytics tools in the market today, Infor hopes to take its micro-vertical transaction focus above and also make an impact in analytics more relevant to those markets.

Migration and systems management tools – there was a brief discussion of its Upgrade/S (for speed) initiative to accelerate upgrades in the customer’s base using the cloud as a transition service or destination. Infor is also focusing attention on hybrid on-premise/cloud deployments, sandbox in cloud and other scenarios likely in its very diverse customer base.

Most of this discussion was under NDA, but the major themes are:

ION Middleware is selling well. Many customers like the connectors Infor has built and the workflow and the alerts in this message bus

Micro-verticals are starting to pay off. They described a major local government win linked to Infor’s Enterprise Asset Management functionality (see my blog post about how Infor helps CERN with its massive asset portfolio around the Hadron Collider). Infor is also seeing significant momentum in the hotel industry.

TCO driven wins. They described several SAP and Oracle shops where the customer has used an expansion scenario to bring in Infor because it could show a sizable TCO advantage compared to staying with  the incumbent  vendor. Another is a “two-tier”, surround strategy similar to one NetSuite has shown traction with for deployment in smaller subs of large companies.

Avoiding best of breed deals: Infor is not chasing CRM or HRM deals, especially in cloud mode. If they see a vertical opportunity for say Lawson’s healthcare HR features, they may compete, but one or two module deals do not appear to be a major focus.
Update: Infor has since clarified it does compete for CRM Marketing deals with its Epiphany and Orbis functionality, and in the HRM with its Enwisen and Workbrain assets.

Infor has over 70,000 customers across its legacy portfolio. The temptation is to offer them an “apps unlimited” scenario so they continue to just  pay maintenance. Starting with the Inforum user conference in April, though, Infor is going to start showcasing its product investments above, and show customers the new aesthetics, the better economics of its middleware, the efficiency of its cloud based sandbox and upgrades and the hybrid scenarios they can plan for.

The success of this customer migration, and how Infor delivers that with its current crop of resellers or with a new set of SI partners, is the next test for Charles and his team. If they can pull it off, they will regain their 3rd spot in the Business Insider Digital Private 100 list – a spot Dell has usurped with its recent financial transaction.

Given his past track record, I would not bet too heavily against this ex-Marine.

One response to “Infor: a grown-up stealth start-up”