Don’t Confuse Room at the Bottom with Disruption 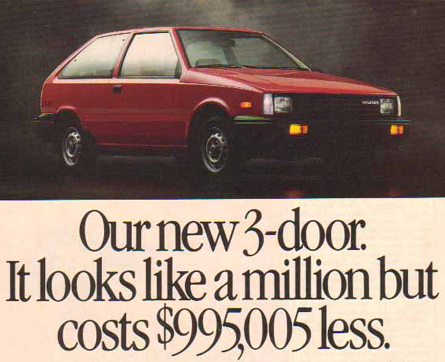 Recently, a very wise VC asked me what I thought about a small but scrappy competitor in the space of my last company, EchoSign.

I told him I didn’t know the company that well, but from what I’d seen, some things might seem appealing.  I bet the freemium metrics appeared good, with positive growth and solid conversion rates.  I told this VC I bet that while they had no true enterprise customers, they had a few nice silos within some large customers.  And I told this VC that while I hadn’t used this particular competitive product directly really, that I’d bet some of it seemed slick.  After all, they got to build it more recently.

But — I said I think you should pass, at least for now.  If they wanted to go for a Big Exit.  Because I suspected that small but interesting early traction was just bottom feeding in the market.  Not a true disruption in the market.

The VC challenged me, and I said I was wrong every day … but I asked him what they were doing that was disruptive.  He said this competitor was cheaper.

Hmmmm … well, to me, that’s not a bad place to be once a space, a category, gets to $100m+.  Cheaper.  Because at this scale, there will be room at the bottom.  But that’s not Disruption — in SaaS at least.  Not usually.

Sometimes in SaaS, there are natural monopolies.  But more often, SaaS categories with significant complexity in workflows and features end up in natural oligopolies.

For a while, it’s hard to tell what’s happening in these oligopolies.  But then the leaders break through, achieve Scale, and the outlines become clear.  And that takes time, years.

And then … once the total space hits $100m or so in ARR, plus or minus … new scrappy entrants don’t just pop up, they actually get something going.   While new players always sort of popped up in the past, but before, when the space was tiny, they didn’t seem to make any impact.  But once the space is large enough … the new players … are able to get some traction, at least a little, and maybe more than a little.

Well, if you’re the new kid in the $100m+ ARR space, it’s possible you are Disrupting The Big Guys.  Maybe.

But it’s more likely something different is happening.  Once the players in a new market get pretty big themselves, they’ll ultimately most likely raise prices.  Try to increase deal sizes.  And focus, at least to some extent, on the higher ROI parts of the business.  And at a sales perspective, they’ll move to optimizing revenue per lead, over closing every possibly lead.

You get big enough, and it’s even better to let a customer or two go at $100k if you can close the third for $1m.  Once sales and marketing gets to be all about the top line, you need to let some marginal customers just go, if for no other reason than holding on price.

And that, among other factors, creates Room at the Bottom.

There are obvious cons at the bottom:

But the bottom isn’t all bad.   Advantages include:

And of course, play it right, and you can start at the bottom and grow into the higher-priced, higher-market share tier.  It’s hard to bank on this if the big competitors are agile enough, but certainly, it happens.

I’m not opposed to Playing at the Bottom of the Market.  Just two learnings from my experience.  First, don’t confuse initial traction at the bottom with disruption.  Know what you are, at least at a given point in time.  And if you’re Playing at the Bottom — be scrappy.  Don’t overfund yourself.  Because there’s gold there too, just most likely rather less of it.

If you’re entering that $100m+ market, with a solid feature set but price as your key initial differentiator — that may be OK.   Just Know Thyself, and plan accordingly.