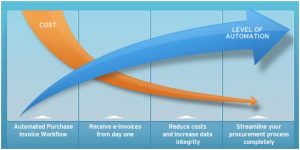 In early fall — way back during the first weeks of September — I had the chance to catch up with some folks from the Basware team in London to learn more about the software provider’s new offerings and strategy for 2010. I followed up with them again the following month, when I also conducted a detailed customer-reference call. During these discussions, it became quite clear to me that this was an organization with a really well thought-out strategy for capturing a larger percentage of the market for invoice automation/EIPP in 2010 and beyond. Moreover, it also became apparent that Basware was embracing a more open approach than most, one that places particular emphasis on connectivity partners to further improve the overall value proposition to prospects and customers. Starting today, I’ll tackle this topic in a series of posts highlighting the evolution of Basware’s strategy, and the types of results customers are seeing as a result of the products it has released to date.

In this first column in the series, I’ll provide some context behind some of Basware’s new capabilities and approaches to invoicing connectivity, not to mention sharing some illustrations about how Basware customers and suppliers are bridging the connectivity divide. But let me first say that my delay in getting this material up on Basware does not reflect its importance relative to other issues; I’ve simply gotten bogged down the past few months with all the vendor briefings and reference calls that I’ve had to work through. Moreover, if anyone ever suggested that Spend Matters sponsors get special treatment, this is proof that they most certainly do not, as my delay in sharing the latest news out of Basware and my thoughts on the subject shows. But enough background; let’s dig in…