The concept of 2 (or 3) Tier ERP is certainly not new. Platinum (now Epicor), J. D Edwards (now Oracle), and more recently NetSuite have for decades gone to large, typically multi-national companies and convinced them to adopt their software in plants and smaller subsidiaries while continuing with a D&B or SAP at HQ and larger geographies.

Plex Systems has offered this value proposition for a while now (it was born in 1995), but a large private equity capital infusion from Francisco Partners starting in 2012, a significant leadership, sales and  R&D expansion in the last year combined with a manufacturing renaissance in the US all make for a much fresher story and its tagline of “it’s what’s next”.

Plex’s focus is on the shop floor, which it correctly believes was neglected in most recent ERP deployments. It also has a tight definition of “tiered” industries it is focused on – auto, aerospace, food and beverage. In each its ideal customer is not a GM or a Grumman or a General Foods, but a supplier to them or a presence at some of their plants. 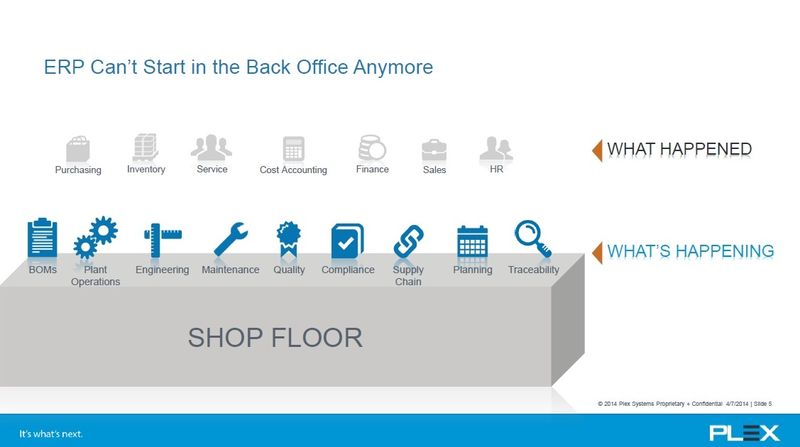 During a visit last week, Plex arranged for Dennis Hodges, the CIO and Ben Stewart, Director of Enterprise Applications at Inteva Products, one of their customers to join us. Inteva provides sunroof and door panel assemblies to a number of automakers. It is a spinoff from Delphi, and Dennis and Ben painted a stark contrast of life with SAP there versus life now with Plex. The SAP implementation ran out of funds and never really made it to the shop floor. The modules which did get implemented needed a heavy dose of support from TCS, CSC and HP/EDS with all the associated issues when multiple outsourcers are involved. Budget, speed and flexibility wise, Plex has been a huge improvement. (btw, Dennis Howlett interviewed Dennis Hodges and you can watch it here. See also my notes here from a shop floor mockup Plex had us participate in)

Both also described trends in global manufacturing. Escalating labor costs in China, India, E. Europe compared to lowered US wages after recent union concessions, increased automation in plants (reducing the labor cost footprint even more) and energy cost improvement in US (from fracking generated new hydrocarbons) versus weeks of ocean shipping time and cost are all helping a renewed focus on US manufacturing that Plex hopes to capitalize on. Plex also eyes an aging generation of QAD, Infor and other manufacturing sites ready for a refresh with cloud technologies.

I had a chance to meet an executive from Caterpillar last year and she described a similar scenario with Plex across several plants in Texas with SAP as its corporate ERP backbone. Jeni’s which makes premium ice cream (and is a breed of new artisanal food and craft beverage makers) also described their experiences.

While it has the feel of a startup with all the new talent, we heard about the sophisticated marketing science and tight focus (Plex has identified 36% of its customers belong to a micro-vertical called Fabricated Metal Processing) of a mature company. Other indications of a mature company: presence at 1,100 production lines in 400 customers, 40+TB of managed storage, 20% of code deleted based on review of functionality few customers were utilizing.

As I heard from several German and Japanese companies during my interviews for The Digital Enterprise, next-gen manufacturing is about agile robotics, wearable computers, mass customization, virtual reality training, IP enabled components and other technology leverage. Plex will need to keep up with this fast changing shop floor. But so will its competitors and many of them still carry the burden of on-premise costs and lack of agility.