Defining the Next Generation Enterprise for 2014

Many of you know that over the last several years I’ve tried to make the case that most organizations are currently falling behind the advancing pace of technological change. That business is so centered around technology today is the reason why addressing this has become a top competitive issue. Becoming better adapted to tech change is even tied to the medium-term survival of many organization as I recently explored in my look at digital transformation.

But to say that technology alone is what is disrupting traditional businesses would be inaccurate. We ourselves have changed — have co-evolved — along with technology. Our mindsets have become expanded by the new possibilities of super-connectedness, new models of working, and pervasive data-based insight that today’s networked revolution has wrought.

That’s not to say there aren’t important pros and cons to these advances as well. Along this journey of global, open, and social digital networks, we’ve also encountered enormous challenges in grappling with issues such as individual privacy and equal access, as well as the inherently large inequalities that emerge from the gaps between the digital haves and have-nots. This is precisely because technology is a profound force multiplier of just about everything it touches. There are other potential worries as well.

As the Economist fretted over recently, most technology revolutions have created more employment, not less. We hope that this is true for the next generation, but we’ll see, given how current models show that producer power is generally moving outside of traditional organizations to external networks that have less well-defined employment models:

Everyone should be able to benefit from productivity gains—in that, Keynes was united with his successors. His worry about technological unemployment was mainly a worry about a “temporary phase of maladjustment” as society and the economy adjusted to ever greater levels of productivity. So it could well prove.

Yet to most of us, it’s quite clear that digital channels combined with engagement at scale within them amongst all our stakeholders is at the core of the future of business. But what does this actually mean? What does it look like to most organizations? How can we articulate the changes to structure, process, and management of our organizations in a deeply digital age? It’s my belief we need a comprehensive yet eminently understandable model of how all this reshapes our organizations. 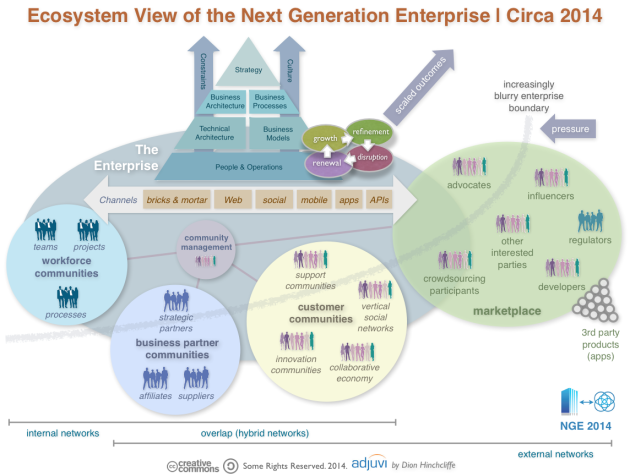 I’ve come to realize we’re trying to hit a fast-moving target with poorly aging models for service delivery and IT governance when it comes to digital transformation. The reality is that it usually takes several years for a large organization to achieve large scale change. By this I mean three to five years, and often more, and that’s just for an individual enterprise-wide initiative.

In today’s operating environment of yearly — sometimes quarterly — waves of highly disruptive enterprise technologies and products, that’s just too long. We need a clearer and more updated sense of where we need to take our organizations, and it must also show us how to increase our technology metabolism as well. This model should include the broad strategic outlines as well as specific adaptations to the latest powerful new digital capabilities such as big data analytics, omnichannel customer engagement, the Internet of Things, social business, and so on. These subjects are all highly strategic to the future of our organizations at the moment, yet they are also interrelated and must fit together relatively well in this model somehow.

Related: Digital Business Ecologies: How Social Networks and Communities Are Upending Our Organizations

Motivation for an Infinitely Renewing Model of Tech & Business

Over the last few years, I’ve adopted a term known as the next generation enterprise or NGE for short. It’s the idea that we can maintain an up-to-date strategic model when it comes to digital transformation. The vision for the next generation enterprise is different from one year to the next and has specific technological phases as well as overall strategic themes at any given time. This vision has its own management theories as well, such as shifting from organizational hierarchy to networked community or reorganizing how we operate to the three new top-level modes, to name just two examples.

In other words, the idea of the next generation enterprise is a relatively complete view — including both business and technology — of the target that typical organizations should be aiming for in their objectives for digital adaptation and growth. For the moment, let’s put aside whether there even is a typical organization, since many of the most important technology innovations are usually agnostic to your particular industry or unique company attributes. In other words, most major technology advances will derail your boat if you ignore them long enough, no matter what business you’re in.

To give us a shared roadmap and a point of reference, I’d like to start putting a clearer definition behind what we think is meant by a next-generation enterprise. Early this year, I mapped out the most important strategic new enterprise technologies, but it was a purely technology view and included a good many tactical elements that aren’t that important when it comes the big picture.

Instead, I’d like to have a more enterprise-centric view that includes the most important advances in business that technology has directly enabled. Some would say that the advent of being digital connected to every human being on the planet at all times (at least in the developed world) is one of those advances, and I agree. This realization is that communities are moving increasingly to the center of our businesses. But it’s more than that. The enclosing strategic conception is really one of ecosystem, whether that’s inside a segment of the enterprise with a single networked team, an external customer community, or a full-on developer network of thousands of application development partners who have welded your digital supply chain to their apps. All of these are ecosystems that must be created (or identified), grown, cultivated, managed, secured, and governed.

In fact, one of the largest issues we have in digital transformation today is that we look at business in a far too simplistic traditional model. In this legacy view, there are functional silos with workers combined with management hierarchies that together actually make decisions and operate our organizations. Then there are suppliers, business partners, and customers, and that’s about it for the big moving parts. 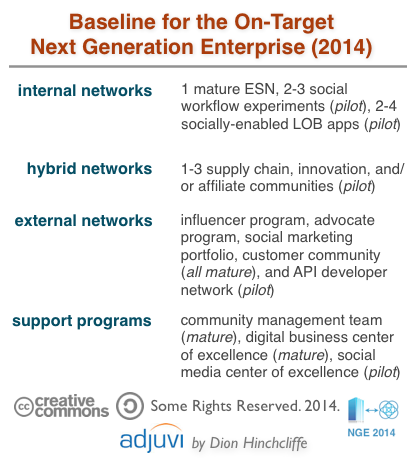 Today’s next generation enterprise plays on a much larger and more complex chessboard. There are thousands of relevant ecosystems that now exist for most businesses, most informal, and across thousands more channels, all with a long tail structure.

This means that while the head of the distribution consists of big channels you’ve heard of — from major social networks and call centers to traditional media and Amazon’s cloud — there are thousands you haven’t heard of and will never be able to deliberately consider and plan for. Business architecture has thus moved from simple planned models to complex and highly dynamic emergent networks across every business function we have. We’ve gone from a few dozen groups of stakeholders to ultimately tens of thousands that we must still manage to somehow. Ultimately, our org structures must adapt to reflect this.

I’ve previously proposed a set of enterprise strategies which have a good chance at addressing many of this issues, which were originally brought forth by the channel fragmentation, scale, and decentralization that we saw greatly exacerbated by IT consumerization a couple of years ago. But I now see that bring-your-own-device was just the forefront of a wave of grassroots led network-enabled change, including bring-your-own-application, bring-your-own-community, and soon, even bring-your-own-workforce.

The Element of The Next Generation Enterprise for 2014

So I’d like to put a stake in the ground and define what I think the next generation enterprise for 2014 should look like. There are several views here, but I’ll start with the more business-centric view of ecosystem and expand to other views as I’m able. In this ecosystem view we have the following components:

Using this model, we can also baseline the various states of maturity of each part of the modern enterprise ecosystem for comparison, as in how far along are we? The essential point here with this view of the next-generation enterprise is that it’s the current target model, not what you should look like today. It’s what you should be aiming for, although you should certainly have some elements of it in place today (see figure 2.)

What do you see as other essential views of the next generation enterprise? What else needs to be added?