Inbound or Outbound Sales? The Answer is Yes 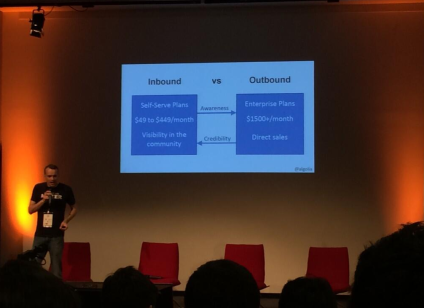 There’s a meme, a CommonThink, among certain segments that Outbound Sales is Bad, or at least, a Little Unseemly.  And maybe a lot bit Old School.

That we’re in a new world of sales, a new consultative world, where leads come in, prospects can try and learn before they even talk to a human, and then, a sales rep thoughtfully answers questions, models business process change, and helps them decide how and why, and if, to buy.

And that’s true.  We are in that world.  Inside sales is terrific.  Warm leads are great.  Live trials of easy-to-use-and-deploy web services really have changed the game.

The reality is, by revenue, this isn’t the way the majority of the world buys.

And the higher you sell up in an organization, the less free trialin’ is going.  SVPs only do so many free trials, trust me, having been a VP in the Fortune 500.  If you wanted my budget in the F500, dude, you had to sell to me.

And in turns out, somewhere between 1 times out of 10, and 9 times out of 10 (depending on the product, the market dynamics, etc.) … the best way to Sell High is to do Outbound Sales.

And in general, the higher the ACV, the larger the deal size, the better outbound works.  The unit economics come together easier.  You can pay people a solid commission, with a relatively low hit rate … if they close six-figure deals.

Down the road though, you’ll need and want both.  Few web services, if any, have enough leads, and enough high enough in the org chart, to meet their entire plan.  And even if you do, who wouldn’t want to grow 10% or 20% faster?  Everyone would.  So even if you are mainly an inbound machine, you’ll want to add outbound later to grow faster.  [This is Aaron Ross’ original point in, and even before, Predictable Revenue — Outbound Sales can be a layer, as it is / was at Salesforce].

Whatever the ratio is, be flexible, and understand, you probably want to figure out your optimal inbound/outbound ratio.

Because usually, it takes both.

One response to “Inbound or Outbound Sales? The Answer is Yes”