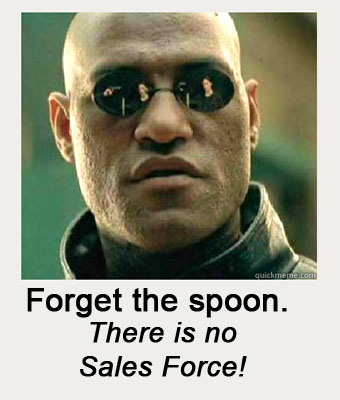 It’s time for another installment of what some of the Enterprise Irregulars have called the Jason and Bob show.  Jason and I have disagreed on a fair number of issues over time, though we have also agreed on a lot.  Jason’s had a great run and is now in the rarefied atmosphere of VC’s.  All of his material is thought provoking and well worth a read.

Today, we’re going to talk about Outside Sales or indeed the question of whether SaaS companies must have a sales force at all, inside, outside, or otherwise.

Jason’s post today is “Inbound or Outbound Sales? The Answer is Yes.”  In it, he argues that

There’s a meme, a CommonThink, among certain segments that Outbound Sales is Bad, or at least, a Little Unseemly.  And maybe a lot bit Old School.

That we’re in a new world of sales, a new consultative world, where leads come in, prospects can try and learn before they even talk to a human, and then, a sales rep thoughtfully answers questions, models business process change, and helps them decide how and why, and if, to buy.

And that’s true.  We are in that world.  Inside sales is terrific.  Warm leads are great.  Live trials of easy-to-use-and-deploy web services really have changed the game.

The reality is, by revenue, this isn’t the way the majority of the world buys.

My role here today is to cast a dissenting vote, and to explain why.  In fact, this one’s been argued between us before so I’ll just refer you gentle readers to my original response to get the ball rolling:

Does your SaaS company have to have a sales force?

In that article I make the case that, no, your SaaS company doesn’t automatically need Outside Sales. It’s a function of who you need to sell to and that’s a function of what your solution costs. The more money involved in an individual sale, the more likely you need Outside Sales.  This isn’t really news or something I made up, by the way.  I learned it at the knee of one Geoffrey Moore, he of the Chasms and Gorillas and such.  I find it makes a lot of sense to think about how you need to sell based on the size of the transaction involved.  In hindsight, it’s obvious that a very expensive purchase carries a lot of risk and that a large organization will need to involve many people and ultimately a highly placed decision maker to get it done.

Jason does tip his hat to this notion with some remarks about selling to SVP’s, but I believe it’s something that startups need to think really carefully about very early on.  Horses for courses. What’s the right way to sell for my specific product and opportunity?  You need to make a conscious choice during the very early stages of the startup about what your strategy will be in this respect, because it’s going to have a profound impact on what sort of company you’re building, what kinds of skills you will need, and even the capital needs of your venture.

Jason mentions the “meme” that Outbound Sales is Bad.  Surely that’s damning with faint praise, but there are sound reasons why that meme is out there.  He says, “by revenue, this isn’t the way the majority of the world buys,” referring to purchasing without the need for Outside Sales.  Au contrare, Jason.  I don’t believe it and I have never seen any data to support it.  In fact, you don’t have to look far to see that the biggest revenue is associated with offerings that don’t require either inside or outside sales. Think Apple, Walmart, et al. Their selling is totally self-service and marketing-driven. Not software? How about Google or Facebook? Oh, not business enough? What about Github, Amazon Web Services, or many other ventures that are hugely successful.  While we’re at it, let’s look to where the majority of the profit, not the revenue goes and the differences are even more stark in favor of finding models that don’t require Sales.

What if that’s the real opportunity–start something that works and doesn’t require Outside Sales.  Or if you prefer, consider the potential for disruption that going into a market with a product that can work without Outside Sales offers. That’s exactly what PC’s did to the Minicomputer vendors. The Rolex-clad, scratch golfing, Armani suited crowd with good haircuts laughed at the little computer stores and the pathetic IBM PC.  Ken Olson himself laughed at them all the way to the point where DEC disappeared and was never heard from again and in a very short span of time.  Hitting an Outside Sales-driven industry with a solution that requires no sales creates the Mother of all channel conflicts for the poor sales-driven company.  It is just as toxic to companies with Sales Forces as Subscription models are to Perpetual License models.

The other reason the meme is strong is capital requirements.  Outside Sales-driven opportunities are going to require more capital to finance their longer sales cycle.  It’s unavoidable when you have to wind your way through the organizational complexity that’s there to stop a company from foolishly spending its money without proper checks and balances on your expensive solution.  SaaS itself is already capital inefficient because it pulls expenses forward and pushes profit out over time relative to getting it all up front in the Perpetual License model.  We live with it to get to the pot of gold at the end of the rainbow, but what if we could at least mitigate it by selling a product cheap and easy enough that it didn’t need Outside Sales or even Inside Sales?

That’s how the companies I’ve mentioned got to be so big so quickly.  That’s why this so-called meme is a real business strategy that’s disruptive and must be considered by any startup.

Figuring out how to leverage strategies like this in new markets where you can be supremely disruptive to the incumbents is what successful startups are all about.  Don’t be a slave to tradition.  You’re not here to build another SAP.  You’re here to build the next generation by disrupting SAP and Oracle.  SaaS is probably not enough to do that, though some argue otherwise.   I think many of those are confusing disruption with room at the bottom (great link from Jason, BTW).  The thing is, everyone’s doing SaaS now, so what’s different about your story?