Acquisitions — If You Do Sell, Try to Make Sure It’s At a Local Maximum

Over the past 6 months or so, I’ve met with a series of entrepreneurs that turned down pretty attractive acquisition offers, relatively early in their lifecycle:

While the companies are different, in all 4 cases — the founders literally didn’t have a nickel to their names.  These aren’t second-timers, doubling down.  They didn’t put a few bucks away last time.  They have nothing to their names but their companies.  And still said NFW.

And man, I’m proud of all of them.  Because all four are great companies, growing rapidly, in great spaces, with great founders.

The thing is — I gave just one small bit of advice.  Understand that if you say No now, that’s OK — but in all 4 cases, you’re saying No at a Local Maximum.  It may take you a while to get to the next Local Maximum.

M&A (mergers & acquistions) can be very confusing at SaaS.   I mean, if you are growing say 10% a month, doesn’t your value also increase 10% a month from an acquirer’s perspective? 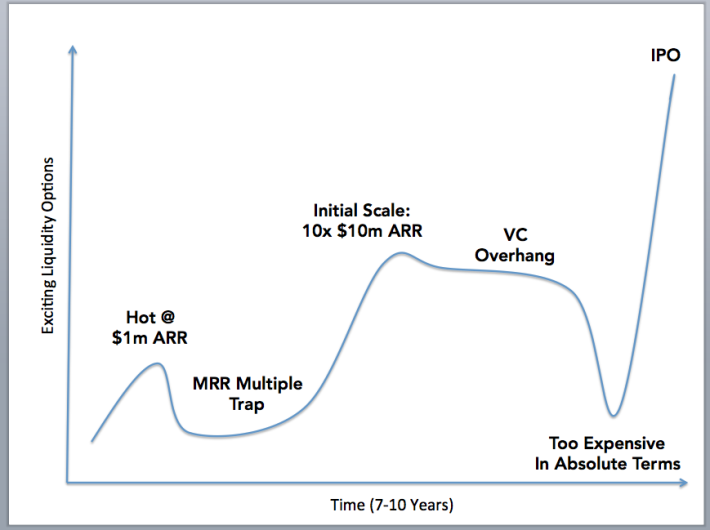 Because the reality is, acquisition offers at a decent price — as measured against revenue, time, and effort — actually come at distinct phases of your company’s lifetime.  At other times, the price can be crappy.

My real only point here is if you say No to a Good Deal at a Local Maximum — understand it may be another 12-24-36-48 months until you get back, structurally, to a time where there is Another Good Deal.  If there ever is another, at all.