You Can’t Hire a VP That You Don’t Love

Recently, a good friend of mine running a Hot SaaS Start-up asked me if he should hire a particular VP of Product candidate I knew well.  The team he’d be managing was a big thumbs up on him.  The board was in favor.  And I knew this VP.  This VP is a 10/10.

But … it wasn’t what this CEO was looking for.  He wanted someone different.  It just didn’t click.  Not deep down.

My advice?  Let her go.  Just don’t hire her.  Even if everyone loves this VP … you have to love the VPs you’re with.  Or you’ll never really trust them.  And then, they’ll never really succeed.  It’s just too hard unless everyone really, truly has each others’ backs.

Over the past 18 months or so, I’ve played a little bit of a matchmaker.  I’m no recruiter, but I’ve “placed” probably 20 folks I know in promising SaaS start-ups as VPs or Directors.  The key here is I look not just for the necessary experience (at same ACV, ability to hire a team), but also, a good personality match.  People that would work well together. 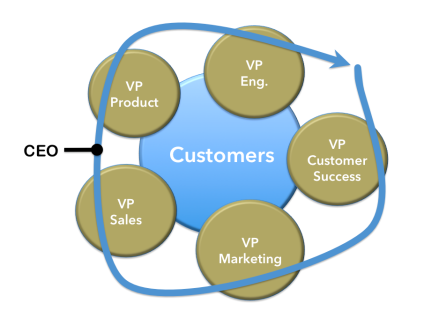 This was for a VP Sales position for a fast-growing SaaS company at about $4m in ARR.  The company had never had a true VPS before, and clearly, it was time.  No VP of Sales candidate is perfect — if they aren’t, something’s off.  Why would they take the job if it’s exactly what they’ve done before successfully?  But this candidate was good.  He had managed a team of 20 before, hired 8 of them successfully, and 3 of the best ones were ready to join him.  He had sold as a similar ACV and even in the same vertical.  And he clearly cared a lot, and was excited about selling the product.

What he wasn’t, was a Mr. Dashboards.  He couldn’t sell up.  He didn’t schmooze, and he didn’t look Great in a Suit.  And he was relatively young and only been a Director of Sales before.   He wasn’t 100% proven a a VP.  He liked to just deliver.  And the CEO didn’t love him.  Instead, he loved another candidate he couldn’t get.  Another candidate that was smooth as silk, knew the industry cold, and had a proven “VP of Sales” on his resume.

I told the CEO to just hire this VP of Sales candidate.  That at $4m in ARR, it was late already, the logo accounts were there, there were enough leads, enough to build on.  Get it done.  I believed, at a minimum, this VP of Sales would drive revenue per lead up, and more than pay for himself.

And the CEO hired him.  And never loved him.  And within 4 months, the VP of Sales was gone.  They never really hit it off, and everything this VP of Sales did that was “wrong” (and there was plenty, as there always is), was viewed as failing a test.   And I guess … this failure … it was my fault.

Fast forward to today.  Coincidentally-ish, I recently met with this VP of Sales and his new CEO in the next job he took.  Where this VP of Sales is just killing it.  They’ve just crossed $10m in ARR and growing fast.  I asked this second CEO, how the VP of Sales was doing.  Blowing it up, he said.  And importantly — the new CEO loved this VP of Sales.  Just loved him.  One of his best hires ever, he said.

So we all know different folks excel in different environments.  But it’s more than that.

SaaS is going into battle together every day.  Wining that next customer.  Saving that big deal.  Building that crazy feature.  Every day, there’s a new drama.

It’s truly a team effort.  The VP of Sales opens and closes.  The VP Marketing feeds the machine. The VP of Customer Success keeps it running and adds fuel to the fire.  The VP Product makes sure the 1,000+ customers get what they need, as impossible as that is.  And the VP Engineering’s job is to make a business process 10x better than it ever was before, just using computers.  This is teamwork.  And it’s really not that silo’d at all.  You’re all working on different parts of the same puzzle — Customers.

Where I don’t see true teamwork, I almost always see eventual failure.  Or at least, underperformance.

As CEO of a SaaS start-up, you really can’t micromanage past Initial Traction ($1.5m in ARR or so) at least.  Before, maybe.  But then, there will just be too much going on.  And you can only let go and delegate to people you trust.

So don’t hire a VP you don’t love.  It’s a little bit like a marriage, perhaps.  No matter what their LinkedIn is, no matter what anyone else says, you have to 100% believe it them on Day 1.  Period.