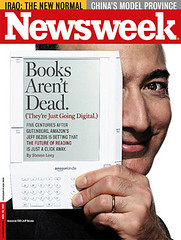 Will the road ahead be rougher for Apple and Amazon?

I loved @dasan’s piece on Apple ($AAPL) – this is what market leadership – make that dominance – looks like.  It’s a very pretty picture – and it held up today.
Apple & Amazon ($AMZN) have been riding high based on their market leading iPod/iPhone and Kindle platforms.  And deservedly so.
But even market leaders with great […]