News Analysis: Understanding The Microsoft and Salesforce Partnership From The Customers POV

Microsoft’s Platform DNA and Salesforce.com Quest For User Productivity Drive The Strategic Partnership On May 29th, 2014, the Redmond based mega vendor Microsoft and the San Francisco based Cloud pioneer salesforce announced a partnership.  From the teleconference call with CEOs Satya Nadella and Marc Benioff; and in conversations with over 50 key executives, partners, and […]

Apple Grows In Net Activations In Q4 As Well As Overall The February 12th, 2014 Good Technology Mobility Index report validates what many enterprises know – Apple iOS is dominating Google Android inside the enterprise.   While this data is limited to the Good Technology customer base, anecdotal inquires and formal polling by Constellation Research, Inc. […]

At the end of the day two veterans of the enterprise software industry, Hasso Plattner and Larry Ellison are re-inventing their companies through database innovations…

The New Engagement Platform Drives The Shift From Transactions

Convergence In The Five Forces Of Consumerization Of Technology Drives The Next Big Thing Social has given us the tools to connect.  Mobile has given us the ability to interact any time and anywhere.  Cloud delivers access points to us with a rich array of content and information.  Big data provides us with the context […]

Microsoft’s TechEd conference this week showcased more than just Windows 8 and its amazingly well-designed Metro touch-based user interface. It also heralded what may prove to be a tectonic shift in the strategic position of Microsoft in the enterprise. And with that shift may come an equal, and opposite, shift in the fortunes of Google […]

Microsoft is frequently cited as an undervalued stock and a profit machine. But the Innovator’s Dilemma is meeting the BCG Matrix at Microsoft – right now – as the advent of cloud computing destroys the value – and profitability – of their primary Windows and Offices franchises. To the company’s credit, they have recognized the challenge and aggressively attempted to respond, but […] 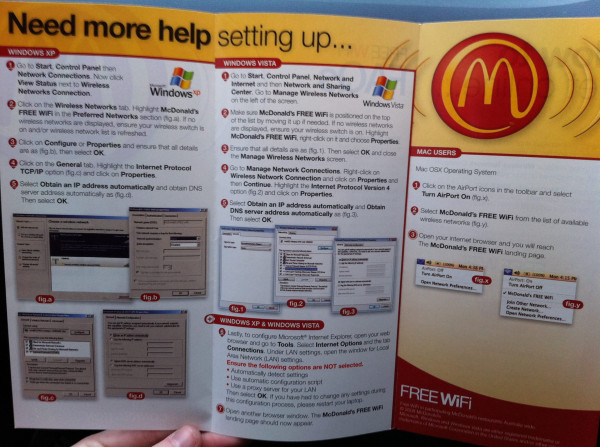 I saw this over at Google+ (second thing I’ve posted from there): These are McDonald’s instructions for how to connect to WiFi.  If you have XP, a full page plus another third of a page.  Vista is a little better, taking essentially a page.  Maybe there is some progress in Redmond, after all. On the […]