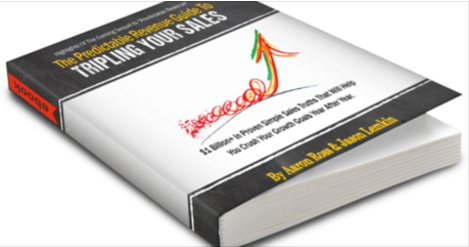 Ok, this will be fun. Aaron Ross and I are putting together “The Predictable Revenue Guide to Tripling Your Sales”.  Aaron created and led the original outbound sales team at Salesforce and is well known to most SaaS entrepreneurs and executives.  His last book on Predictable Revenue has become the key handbook for most SaaS founders […]

The Order to Cash Subscription Process

Subscription companies face many of the same challenges that more conventional companies face but the nature of these businesses puts an entirely different spin on the challenges.  All companies have to acquire new customers, make products and price them attractively without leaving money on the table.  Also, once a product is purchased, a company needs […]

Prisoners, And Why It Doesn’t Really Matter Your App Is So Hard to Rip Out

There are two things I see SaaS entrepreneurs who are post-Traction and post-Scale say again and again: We’re So Sticky.  Once we’re in, it’s so hard to rip us out. Our Churn is Basically Zero in the Enterprise.  We’re doing great because No One Leaves. If you’re coming from a Freemium background, or B2C, that […]

I guess those Old School Enterprise guys running Workday know a thing or two about SaaS too, eh?
So keep an eye on your SaaS investments. They have time to fix it if the growth rate slows–they’ll see it coming from the sales funnel. And if they don’t manage to get it fixed before it manifests in the revenue, something very bad is probably happening there.

SAP more of the same

I tend to not pay too much attention to quarterly earnings – whether they are good or bad. But my friend Dennis Howlett says “SAP’s Q2 results are stunning by any standards” and I decided to apply my own “is this an inflexion point?” st…

Not all revenue is created equal

Fred Reichheld coined the term “good profits” in his book Ultimate Question. His point was in pursuit of financial goals we often focus on certain fees (and related profits) which actually turn off customers and lead to dissatisfaction and worse. Lord knows we have plenty of examples of “bad profits” at airlines, banks and telcos. […] Every now and again I see the old chestnut trotted out that Software has no marginal cost.  It’s used for all sorts of reasons.  The gut feeling that it is true is probably at the heart of most people’s justification for why piracy is okay, for example, not that I’m saying most people think it’s […]