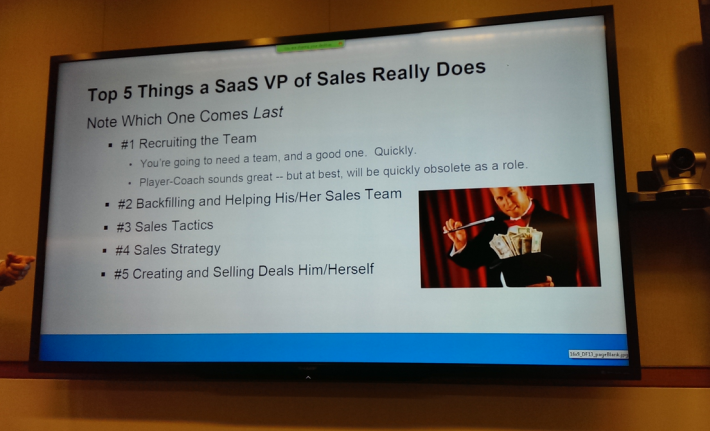 How to Hire A Great VP Sales: The Full Video (and Transcript)

Recently in New York I was invited to give the keynote at the New York Enterprise Tech Meet-Up (thank you to John Lehr and Work-Bench for setting this up).  It turned out to be a great event, with the maximum 250 capacity hit days earlier and unfortunately a lot of folks didn’t get to attend. […]

Box did a nice SaaStr interview the other day ahead of BoxWorks, their big annual user conference September 2-4.  It hits on a lot of the key themes we’ve worked on together here. It’s definitely worth attending BoxWorks if you can.  We’ve talked in the past about why you should probably have a customer conference as […]

Although I don’t know the circumstances of the seemingly sudden CEO change at Adaptive Insights (formerly known as Adaptive Planning) I can share what appears to be known at this point along with a few observations. Adaptive Insights CEO John Herr, appointed on 10/31/2011, is no longer listed on the management section of the company’s web page or listed a member of the […]

This week the crazy internets have been abuzz with the story of AOL executive Ryan Block, who attempted to do something rather mundane, cancel his cable, and was subjected to an excruciatingly long ordeal with the customer service representative at Comcast. This is well covered, I don’t need to relive it… and more to the […] 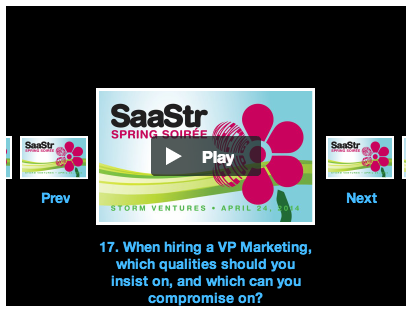 A few weeks back we had our second SaaStr Social.  It was quite a hit, with over 700+ SaaS entrepreneurs, execs and VCs getting together at Storm Ventures. The first time, we just had BBQ and cocktails.  That was pretty fun as it was. This time, we added some terrific, standing-room only content — on […] 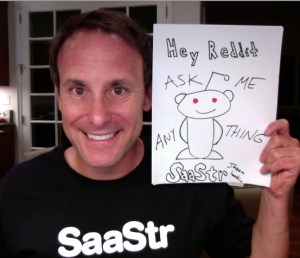 If you have time, tomorrow at 2pm PST I’ll be online at Reddit answering your questions on SaaS, or I guess, about just about anything. Since it’s called Ask Me Anything. I’ve set aside at least 2 hours so if you want to ask anything you haven’t gotten an answer to, please come by and […]

When the news of Facebook buying WhatsApp broke, the first thought that crossed my mind  was: How much would it matter if Facebook went away in favor of a light wt Instagram + tweaked WhatsApp. That’s 90% of the native behavior. Seriously. WhatsApp can keep 450 million daily active users highly engaged with 35 employees. Instagram now has over a 150 […]

Hi, I’m Naomi, Your HR Tech SmartyPants Robot Last week I was privileged to deliver a presentation to the top women execs at ADP about the future of HR and HR technology.  Sounds straightforward enough, but it wasn’t.  My presentation wrote itself, and it demanded that I title it: ” A Tale of Two Futures.” […] 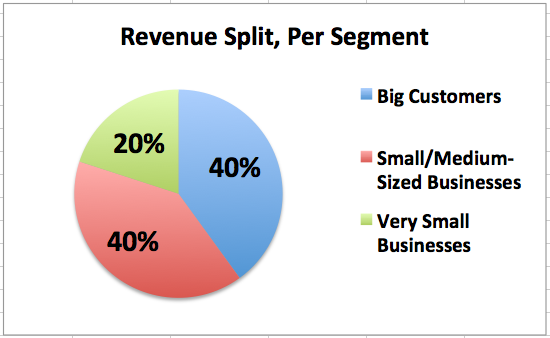 A Solution Sale Can Capture 3-20x the Revenues of A Tool Sale. With Almost the Exact Same Core Product.

Recently, I caught up with two great entrepreneurs/CEOs, both doing a few million in ARR and growing quickly.  Doing well. Both had a roughly similar make-up of customers, split between: Big Customers (Fortune 500 / Global 2000 types) — not many, but each paying a lot; Small and medium-sized businesses, each paying four or five […]

I read this today and thought “yes, it’s about time”. When a tab is streaming audio in Chrome 32 Beta, an indicator will appear next to the close tab X. The indicators will change depending on the source, so streaming audio will be denoted by a speaker icon, a red circle will indicate a Web […]