Yes, this is a public shaming. Sorry. (Not really). 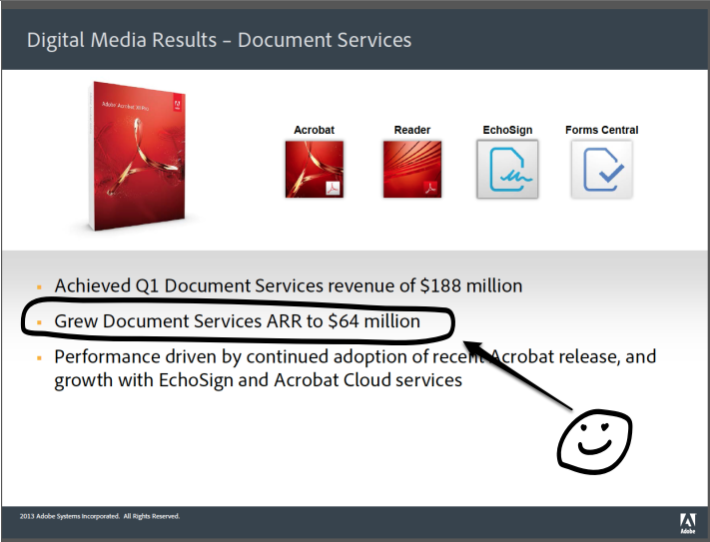 A little while back, a VC asked me what I thought of a prospective mid/late stage investment.  I was/am reasonably familiar with this company as it is adjacent to EchoSign. My answer was, well, I’d probably pass — certainly at the valuation (12x+ ARR).  I said the product was ooooold and the platform dated, the […]

Last week I had the privilege of keynoting CeBIT in Hanover. The theme was “Shareconomy“. From the CeBIT website: A multistage screening process involving top executives from leading high-tech companies and user industries, international research institutes, and thousands of fans at the CeBIT Facebook fan page resulted in Shareconomy being selected for the CeBIT 2013 keynote […]

Your Customer Success Team. Hire Early. And No Squishy Goals — It’s All About the Numbers.

If this is your first SaaS company, you may not have ever hired or built a Client Success team.  This one isn’t nearly as risky as a VP of Sales, or a VP of Marketing hire.  If you hire a great, experienced Client Success leader as your first hire here, and you like him/her, and […]

Post-Traction, You Need to Spend 20% of Your Time Recruiting

Love him or hate him, Nick Saban is the most successful college football coach of the current generation.  Winner of 3 out of 4 of the last national championships. And how often is he recruiting?  Every.  Single.  Day.  In fact, every single day he and his team go into their Recruiting War Room, and analyze […]

Apologies to all those to whom this is already well known.  But, I know many of you have never hired a head of marketing before.  And as soon as you get your MSP (Minimum Sellable Product) out the door, and you’ve got your first 10 customers under your belt — you’re probably going to want […]

One of the things that causes a lot of anxiety in SaaS is market size.  If you’re creating the latest Pinning app, or Social Network, the odds are surely against you.  But in consumer internet, often you know if you hit it, however low the odds are, at least the market is huge (or at […]

I was talking with team members on our sales team yesterday, considerably younger than I am but at that point in life where they are increasingly self-aware and conscious of the world around them. We were talking about Instagram and the tendency for people to share even the most mundane moments in their life, to […]

A few months ago I read the Civil War novel The Killer Angels by Michael Shaara. A non-fiction work, this is a historical account of the battle of Gettysburg that is written in the style of a novel where characters develop and intimacy, flaws, and achievement are revealed as the novel progresses. After having read […]

End of an Era: Intel Exits the Motherboard Business

There are two seminal moments in m personal history that explain why I ended up in the technology industry. The first was when I first encountered a BASIC compiler in the 8th grade and discovered that I could write a program, store it on a cassette tape (that I later upgraded to an 8″ floppy […]